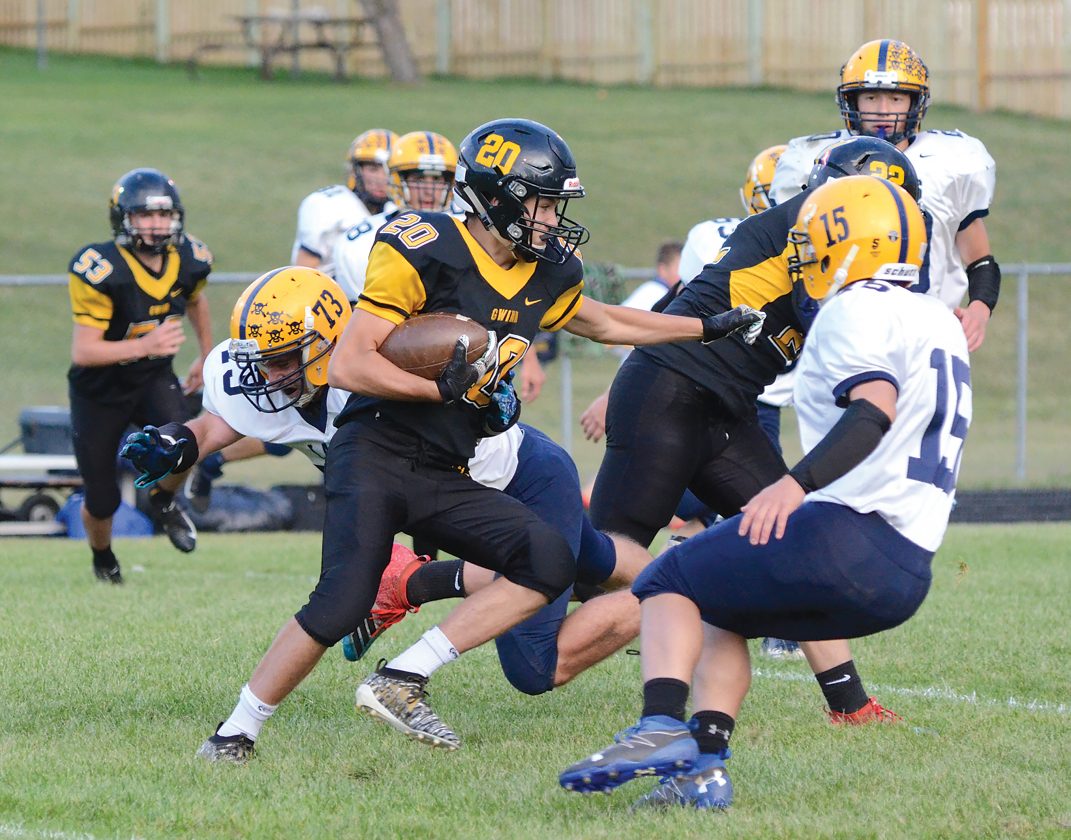 GWINN — Last week, the Lake Linden-Hubbell football team held a double-digit lead at the half against Ishpeming, but was unable to hang on to complete the victory.

On Friday night, the Lakes finished the job as they once again held a considerable advantage at halftime, but this time, they maintained it to defeat Gwinn 38-24.

“We prepare for the beginning of the game pretty well, but obviously, the third quarters we don’t prepare very well at all. So maybe we should fire our head coach,” LL-H head coach Andy Crouch joked. “But our kids are playing hard right now. We’re really beat up.

“We’ve got injuries and every guy that’s come in is stepping up. I’m very proud of these kids right now. It’s pretty awesome to see how hard they’re competing.”

The Lakes (2-1) had 354 total offensive yards, including 311 rushing and 43 passing. Caleb Klein led the ground attack with 127 yards on 24 carries and two touchdowns.

Gwinn had 279 total yards including 93 rushing and 186 passing. Modeltowners quarterback Caleb Anderson threw 12 of 26 with three touchdowns. David Duvall caught three passes for 89 yards and two touchdowns. Shafaar Evans caught the other touchdown catch and had five receptions for 54 yards. Toquan Starnes had seven rushes and 74 yards for Gwinn.

For the Modeltowners, the game was their third straight defeat and it was another outing where Gwinn looked really sharp at times, but others, not so much.

“There were times we looked good and times we looked young,” Modeltowners head coach Dion Brown said. “We’ve just got to be consistent. We’ve only got really three or four seniors on our team and you can tell. Sometimes, reading the keys is not there for us. That’s the biggest thing. They (the Lakes) didn’t do anything that we didn’t practice for. The guys just have got to read the keys.

“We had a few inconsistent throws over the head where the guy was wide open, but the quarterback just kind of put too much on it. A few dropped passes. It’s little things. That’s what’s been killing us the first three games.”

LL-H got on the scoreboard first on its opening drive, converting on fourth down twice with the second one being a 17-yard touchdown pass from Brandon Lavigne to Caleb Gregoire. The Lakes also picked up the two-point conversion and led 8-0.

The Lakes defense made the next big play as it picked off Gwinn quarterback Anderson’s first pass, and four plays later the offense was in the end zone as Caleb Klein scored on a 19-yard run. LL-H picked up the conversion again and led 16-0 after the first quarter.

Down by two scores heading into the third quarter, the Modeltowners needed a spark and they got it thanks to a sharp kickoff return from Evans. One play later, Starnes broke free down the LL-H sideline for a 45-yard run to bring the ball deep into Lakes territory. Gwinn capped off the drive with a 12-yard touchdown pass from Anderson to Evans and with the conversion, GHS only trailed 16-8.

LL-H answered back, though, with the help of some trickery. The Lakes fooled the Modeltowners with a fake punt to pick up a first down and with less than two minutes left in the quarter, LL-H found the end zone again, this time on a 13-yard run by Lavigne. With the conversion, the Lakes took a 24-8 lead into the fourth.

Gwinn wasn’t done though. The Modeltowners got on the board again early in the fourth when DuVall made a leaping 18-yard touchdown catch. Anderson picked up the conversion and now Gwinn was down by just eight points again.

However, the Lakes wouldn’t be denied. LL-H got two more touchdowns on long runs by two different running backs, and was up 38-16 with 6:39 left in the game.

“Hey, I’m a history teacher,” Crouch said of his running back-by-committee rushing attack. “I’m a big fan of Eli Whitney and the interchangeable parts. That’s what we do. We’ve got to have kids, so we’re not relying on one kid and they can stay fresh. That’s worked well for us.”

Gwinn had one last gasp as Anderson and DuVall hooked up again, this time for a 49-yard touchdown, but the Modeltowners failed to convert on fourth down on their next possession and the Lakes ran out the clock.