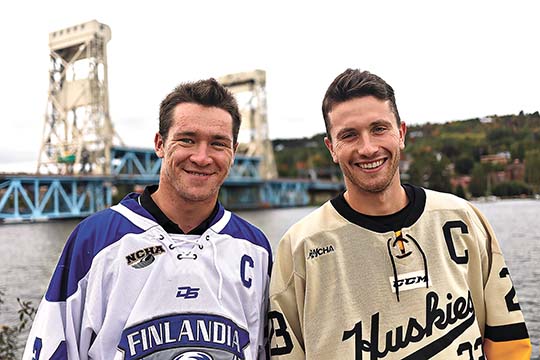 HOUGHTON — When they last shared something, it was the same jersey and the same job while they were making a final bid at a state title at the high school level for the Houghton Gremlins in hockey. Raymond Brice and Connor Hannon, who shared the captaincy for the Gremlins, had to get past a pesky Sault Ste. Marie team that eventually proved again to be a stumbling block the Gremlins’ leaders could not get past in a 2-1 loss on March 5, 2014.

Since that time, both players went their separate ways. However, they both have ended up in similar spots as both are serving as captains of local college hockey teams, Brice at Michigan Tech and Hannon at Finlandia.

“It’s pretty cool,” said Brice. “I mean, he was a special player that I played with and we were very competitive against each other in high school. I mean, it’s huge for him. I’m very honored myself to get to wear the ‘C’.”

“That is so unique, and it’s so cool,” said Hannon about the fact that both are in similar roles this season. “To be both the captains a whole our senior year, and then to see us go different ways and then leading the two programs in the local area. It’s just, it’s cool.”

Both players learned a lot about leading from trying to help the Gremlins advance. Brice is quick to point that out.

“I just think that just learning how to lead,” said Brice when asked what he learned from high school. “I think that’s probably your building block of leadership. You learn the simple things there and grow as you get older and mature.”

Brice matured as part of a process that saw some change. He joined the Soo Eagles of the North American Hockey League, where he scored eight goals and 20 points as a rookie. After that season, the Eagles moved to New Jersey, and Brice shined in his new environment, scoring 21 goals and 36 points, earning the attention of then-head coach Mel Pearson and the Michigan Tech Huskies.

Since then, he walked on to his hometown’s team and eventually earned himself a spot on the dressed roster before taking a hit from Minnesota State’s Ian Scheid that sidelined him for the remainder of his freshman year.

Three years later, Brice now serves as captain of the Michigan Tech Huskies, an honor he has earned through his hard work in practice every day.

Hannon feels confident that his former linemate will do a great job with the Huskies, who have already started the season strong with a road sweep of the Robert Morris Colonials and a pair of losses at home to the Alaska Nanooks.

“I know he’s gonna do a great job at Tech, and they have a good squad,” Hannon said.

Hannon, who outscored his linemate in their senior year at Houghton, took a different path to college hockey. After completing his senior year, he joined the Portage Lake Pioneers, scoring eight goals and 14 points in 2014-15. The following year, he put up 17 goals in 15 games.

He continued to find success with the Pioneers in his final season with the team, 2016-17, where he had 10 goals in eight games.

Midway through the 2017-18 campaign, at the behest of coach Joe Burcar, he decided to give NCAA DIII hockey a chance by joining the Lions. The rest, as they say, is history.

In his first year, he played in just 13 games, but scored three goals and nine points, which was enough to lead the team in scoring.

Last season, he served as an assistant captain, and he put up six goals and 15 points in 22 games, while playing a variety of roles, from center to left wing to defenseman, depending on what the team needed on a given night.

“Obviously, both schools have a lot of tradition,” Brice said. “(It is) such an honor. (We are) very humbled by that.”

Hannon hopes that he can be as effective a leader as Brice.

“Hopefully I can do good with these guys at Finlandia and push in the right direction,” he said.