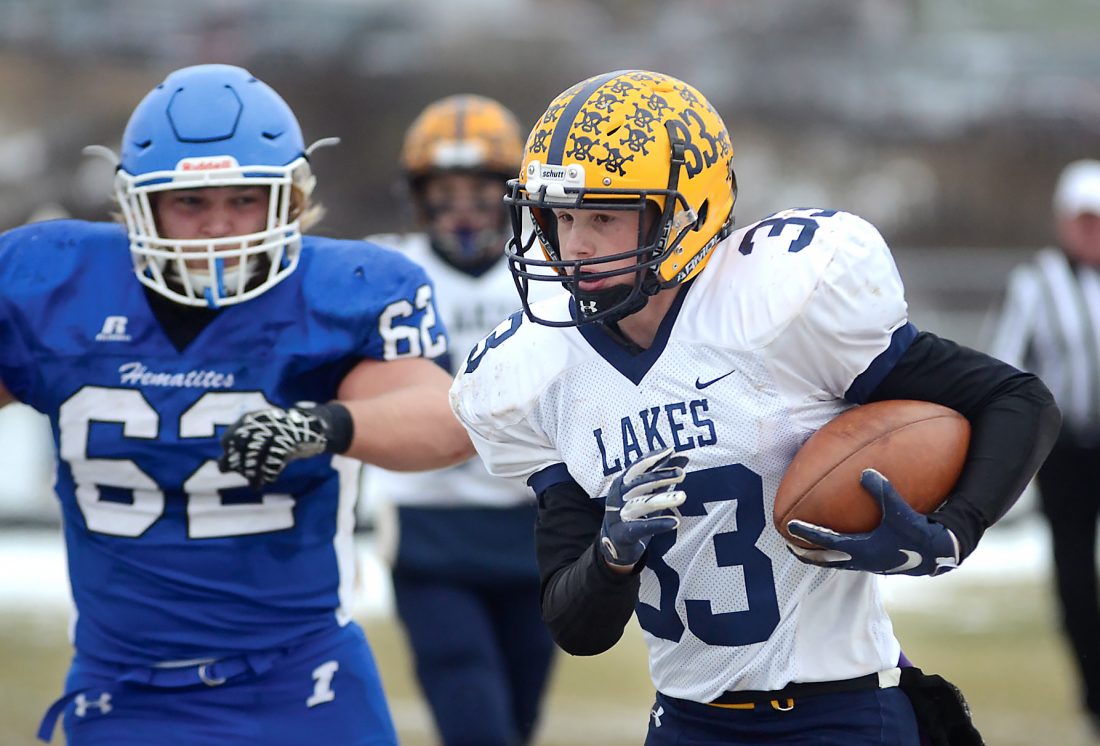 ISHPEMING — Had you looked at Ishpeming’s record through the first five weeks of the season, you might’ve thought that the Hematites were going to have an average year at best.

But great programs find ways to win, and since starting off 3-2, the Hematites have won their last six games as their playoff journey remained alive on Saturday with a 30-18 win over Lake Linden-Hubbell.

This was an MHSAA Division 8 district final game played under cloudy skies and 30-degree temperatures at the Ishpeming Playgrounds.

Ishpeming (9-2) now hits the road for the first time this postseason, traveling to face Beal City (10-1) for a regional final at 1 p.m. Saturday at Mount Pleasant Community Stadium.

The Hematites played Beal City once before in Week 6 of the 2014 season, a 20-0 win for Ishpeming.

Saturday was bound to be a good matchup after the Hematites and Lakes had a 36-34 shootout back in Week 2, a game Ishpeming won on a go-ahead touchdown from John Corkin with 6.9 seconds remaining in the fourth quarter.

The playoff meeting was no different, with the Lakes leading 18-16 after three quarters.

The Hematites held the Lakes scoreless in the fourth quarter while getting two touchdowns of their own, the first from Otto Swanson with 11:30 remaining to put his team back in the lead 22-18. The other came from Corkin with 1:02 left to gave Ishpeming its second consecutive district title and first for first-year head coach George Niemi.

“The big thing is not to panic,” Niemi said. “Just one play at a time. We just needed to eliminate mistakes. We kept killing our drives on our own. They weren’t stopping us. We were shooting ourselves in the foot.”

Swanson led Ishpeming with two TDs and 137 rushing yards on 16 carries. Corkin added 87 yards including his game-ending score on 16 carries, while Ben Pruett rushed for 72 yards and a TD on 26 carries.

“Again, it’s a triple-headed monster,” Niemi said of the trio. “We’ve got three backs out there. We can rotate them in, rotate them out, and they give us a different look each time one of them is back there.”

Another strategy Ishpeming utilized was a no-huddle offense. The Hematites rolled with the no-huddle from their opening possession all the way up through the fourth quarter as they looked to wear down the Lakes’ defense.

“We’ve been using the no-huddle since we played them in the last game in Week 2,” Niemi said. “The whole idea was to not allow them to call their defense. They’ve got to set up on the line while we’re setting up our formation. We ran it against them in the first game and we were successful again with this game.”

It was a rebound year for the Lakes, who returned to the playoffs after a 2-7 record in 2018. They finished with a record of 7-4 after making its sixth playoff appearance in the last seven years and 13 of the last 16.

The Lakes’ three touchdowns all went through senior quarterback Carter Crouch, who was 8 of 21 passing for 170 yards. Crouch connected with Caleb Gregoire twice and William Lyons once for the three scores.

Ishpeming fumbled the opening kickoff, which was recovered by the Lakes, but they were unable to capitalize. The only TD of the first quarter was Swanson’s first of the game, a 3-yard rush with 2:29 left. His conversion run was good to put the Hematites up 8-0.

LL-H fired back on the first play of the second quarter, however, with Crouch finding Gregoire deep over the middle for a 51-yard TD pass to make it 8-6. The conversion attempt from Brandon Lavigne was no good, and that was also the halftime score.

After Corkin was intercepted by Caleb Klein, who ran the ball back to the Hematites’ 27, the Lakes cashed in five plays later on a 16-yard TD pass from Crouch to Lyons on second-and-10 to make it 12-8 LL-H in the third.

Swanson answered that call with two runs of 20-plus yards, which set up Pruett for a 10-yard TD with 5:27 remaining in the third.

Crouch’s third strike of the day was to Gregoire for his second of the game with 1:41 remaining in the frame, putting the Lakes up 18-16 entering the fourth.

It took Swanson three plays to put Ishpeming back in the lead with a 1-yard rush on first-and-goal to make it Ishpeming 22-18.

LL-H had three possessions in the fourth to try to get the lead back, but were unable to find the end zone. The major turning point was Crouch getting picked off by Ishpeming’s Tanner Romback on a third-and-17 with 2:42 remaining. Four plays later, Corkin put it in the end zone on a 9-yard run to all but seal the deal with just over a minute to go.

As a team, the Hematites were 1 of 6 passing, with Corkin going 1 for 3 with a 16-yard completion to Jacob Kugler, who was targeted twice. Kugler also had a fumble recovery on defense for the Hematites.

Gregoire led the Lakes’ receiving corps with four catches for 79 yards. On the ground, LL-H rushed for 71 yards on 34 attempts, with Jesse Hill carrying nine times for 32 yards.

Some favorites fell in Ishpeming’s side of the bracket during the weekend. The unranked Aggies defeated the No. 3-ranked Johannesburg-Lewiston (10-1) 33-20, while No. 4 Breckenridge (9-2) fell to unranked Saginaw Nouvel (7-4), 46-28. Breckenridge was Ishpeming’s regional final opponent last season, eliminating the Hematites by a score of 12-6 in a defensive slugfest.