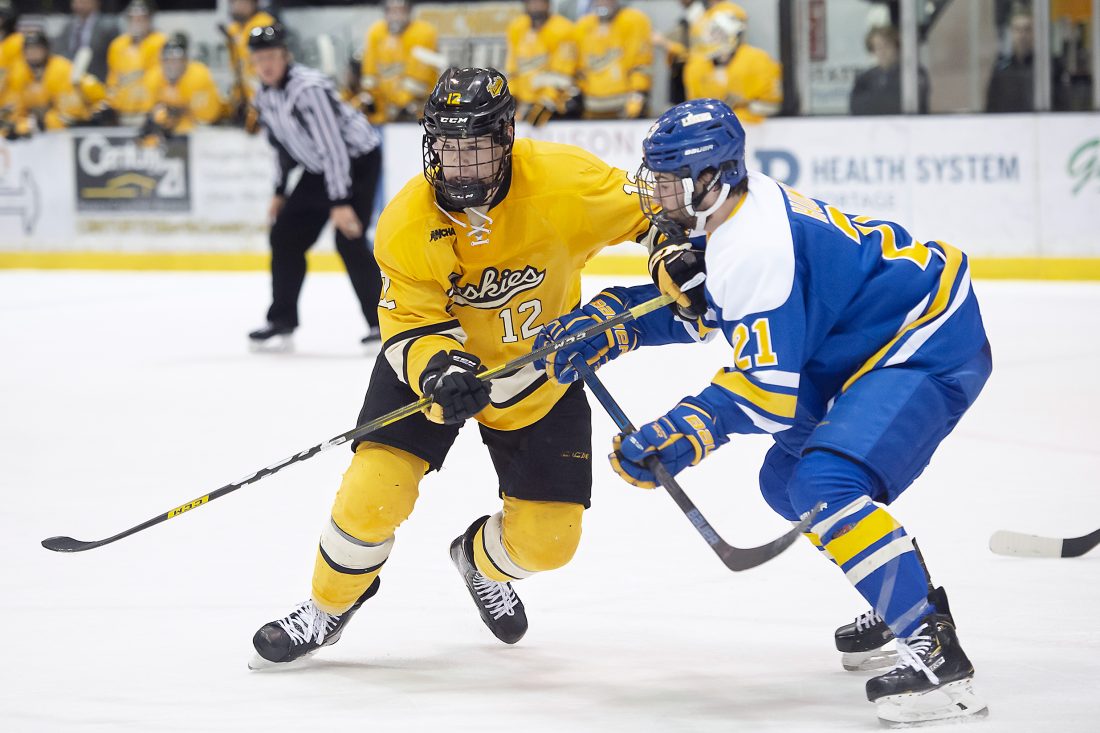 Winning covers for a lot of teams’ and players’ shortcomings.

Winning makes dinner taste better and going into the locker room more of a joy than a job.

But winning in itself does not substitute the work it takes to develop young talent properly. And that’s what Michigan Tech head coach Joe Shawhan said the focus has been with his young hockey team this season.

“We’re still putting this thing together with a really young team. The expectations here are high. We certainly have high expectations as well,” Shawhan said. “We want to win every game. I still can’t put a mood within the team that it’s all or nothing, because we need these guys to continue to grow. With people, fast is slow. We can’t rush the process. We can work it, we can push it. We have to read the mood of the team, read the mood of the individual and see how much of it they can take.”

The Huskies are fifth in the conference with 35 points. They trail Alaska (40 points) and hold a slim lead over Bowling Green (34). Despite a belief in the locker room the Huskies can still get home ice for the WCHA playoffs, Shawhan said the overarching focus has been developing the freshman and sophomore talent. Tech’s stumble into 2020 has been a reminder of the youth on the team. Shawhan said it’s important not to panic into rushing young talent along.

“If you’re not having success, it’s really hard to try to push people through that, because that’s when you lose confidence,” Shawhan added. “It’s easier to push guys when you’ve had some success. Or you can get a result, like Saturday after a disappointing performance on Friday. You can get a result on Saturday, that’s just natural inner drive. But to push guys too hard when you’re not having continued success, that’s when you get into confidence and breaking guys down and we’re not going to do that. We want guys to continue to grow.”

While Huskies players have shown tremendous individual skillsets, as a team, Shawhan said the team has a lot of improvements to make. Recently, some of it isn’t exactly skill-based.

For the last two weeks, the Huskies have suited up in black and yellow jerseys in practice. For most of the season, the Huskies wore a multitude of jersey colors according to line pairings. The black against yellow practices have demonstrated Shawhan’s intent to get the players to get more physical and gritty across all areas of the ice, from the corners and behind the net, to in front of the net, through the slot, and into the neutral zone.

“Yeah there’s not a method to that other than we’ve been trying to do a lot of compete drills and competition type stuff team to team,” Shawhan said. “That’s something we wanted to experiment with and we’re getting some results out of that. Getting a little bit better compete effort.”

Ferris State was swept by Northern Michigan the following week and had last week off.

“It’s a whole different game — they’re much better in their rink. They put their team together conducive to their rink,” Shawhan said. “They know the boards. It is a different dynamic. They know the bounces and things. They funnel pucks to the net more regularly. They’re more dangerous. They have a good feel of the size of the rink when they can take chances in transition and when they shouldn’t, which, when you go in there for the first time, you have to figure out as the weekend goes on.”

“I planned on playing Beydoun,” Shawhan said of his decision after the Feb. 7 loss. “I thought that if we were going to make a goalie change on Saturday, I still think that Blake, we have to develop Blake as well. He’s a young talented goaltender and my intent would have been to go back with him in the net if we were going to make a change. I don’t think there was a need to put Matty through that, just standing there and sitting there.”

Sophomore wingers Alec Broetzman and Brian Halonen, along with senior center Alex Smith make up three of the team’s top four scorers, with a combined 31 goals and 55 points. Last weekend against LSSU, the trio combined for 12 points.

“I think those guys have been very consistent for the most part for us all year long. They’re continuing to grow. Very appreciative of their efforts,” Shawhan said. “Everybody’s working extremely hard. It’s important to get secondary scoring. When we do that, to compliment the guys that are getting it done, it’ll take a lot of burden off.”

Shawhan said the overtime win last weekend went a long way to help regain some confidence just ahead of the postseason.

Freshman forward Jake Crespi did not practice or play during Winter Carnival week because of a concussion sustained against Alabama-Huntsville on Jan. 31. He returned to practice Monday.