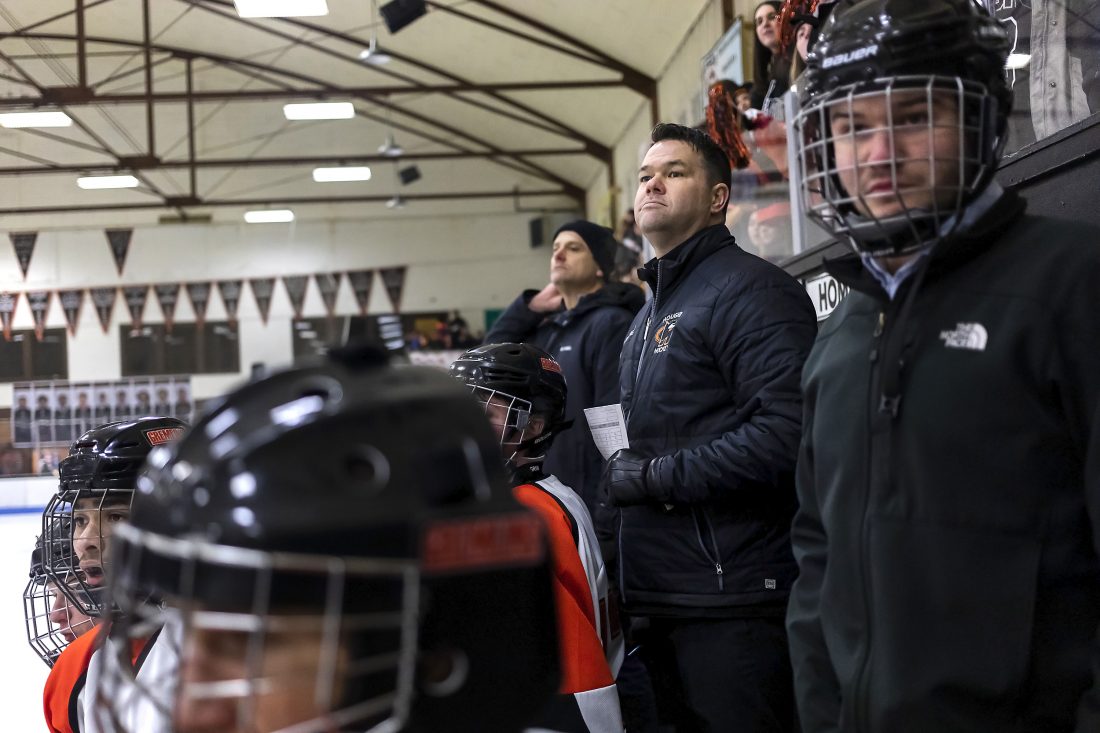 HOUGHTON — In early February, Houghton High School hockey coach Corey Markham was informed of an honor being bestowed upon him by the Michigan High School Coaches Association: He will be part of the 2020 Hall of Fame class.

As his Gremlins prepare this week for the Region 17 Tournament at the MacInnes Student Ice Arena, the man behind the bench is looking forward to his 21st trip through the gauntlet that is Region 17 where on any given year, his Gremlins, the Hancock Bulldogs or the Calumet Copper Kings have a realistic shot at winning a state title in D3.

“I’m extremely honored and humbled,” Markham said. “You know, it’s not too often, when you’re an active coach, you get named into a Hall of Fame.”

Traditionally, the Hall of Fame comes calling at the end of a player’s, coach’s or manager’s career. However, in recent years, the MHSCA has begun honoring its coaches who are still doing what they love, like Traverse City Central’s Chris Givens, a Hancock native who was honored last year.

“The Coaches Association of Michigan has done that a little bit lately,” Markham said. “Chris Givens was inducted last year out of Traverse City. I am so proud and humbled. You just don’t think about these things. When you start coaching, you don’t think about any accolades or anything like that. You’re there for the kids and trying to make the best of them. To get recognized. It’s a special special thing.”

Markham is 341-197-21 in his already remarkable career, one he had no idea he was in for when he first returned to the Houghton area from college, but one he hoped would eventually be in the cards, so to speak.

“Once I started, I pretty much knew that this was the job that I wanted,” Markham said. “You can go back to my high school days, I knew that I wanted to be a teacher and a coach.”

Of course, in order for Markham to live out his dream, he was going to have to follow the legendary Copper Country hockey coach Don Miller.

“There’s a lot of people who influenced me,” said Markham. “Don Miller is one of those people. I saw he enjoyed his job. So, I wanted to follow in his footsteps.”

Things fell into place for Markham very quickly when he came back to the school that educated him when he was high school-aged. Everything happens for a reason, right? In Markham’s case, a retirement at Houghton High School just happened to come exactly as he entered the job market.

“I got extremely lucky where Fritz Wilson decided to retire at the end of a semester, in 1997-98,” Markham said. “I (had) just graduated in the fall of 1997, so I was able to step into the PE (physical education) program at Houghton.

“Mitt (Miller) took me on and I was assistant for one year. He retired and I was lucky enough to have (Athletic Director) Bruce Horsch give me the full-time job.”

Markham, a confident coach who was named the D3 Coach of the Year for 2013-14, admits that he still had a lot to learn about teaching and coaching when he was named head coach.

“When I look back now, I was real wet behind the ears and (I) don’t know that I was totally ready for it,” he said. “It was just learning by fire. We had some strong teams early on and it’s just been a great ride since.”

Markham will be forever grateful to the man everyone referred to Miller for helping him make the transition quickly and earn the respect of his players from the moment he stepped onto the ice with them.

“He really did try to prepare me,” Markham said. “He didn’t tell me he was going to be retiring, but he let me do a lot of the coaching. He let me handle a lot of stuff. He would…have me running a lot of the practices. That really helped.”

Like Miller, Markham, whose teams have won seven conference and regional titles, has tried to instill one trait in every one of his teams, an unparalleled work ethic.

“That’s what I’m most proud of,” Markham said. “When I hear from other teams that come up from downstate, they ask, ‘How can you get your kids to work so hard?’ You know, it’s a testament to the kids that they’re willing to lay it on the line and work. I’m a little bit hard on them, but they respond.

“It’s all about the kids. They’ve been willing to put in that effort. That’s what I’m extremely thankful for, the great, quality kids that have come through the program since I’ve been here.”

The consistency with which Markham’s teams are competitive year in and year out says a lot about the quality of leadership his players show each season as well.

“For the most part I’ve gotten good leadership,” he said. “If you want strong programs each year, your new leaders have to be strong. The strongest years we’ve had, we’ve had unbelievable leadership. The young kids see that and they want to carry on that tradition.”

Three times, Markham has been to the state finals, but unlike his mentor, he has yet to break through and win that final game. It is the one thing that still eludes him.

“That’s the thing that I want more than anything in the world, to win a state championship,” Markham said. “To be there three times and not not win, it just is so extremely disappointing.

“I’m extremely proud to have gotten there. It’s not easy. We’ve had tremendous teams that have had opportunities to, but that’s going to stick in my side until I can actually win one. That’s my goal every year. That’s our team goal. We’re gonna keep striving until it happens.”