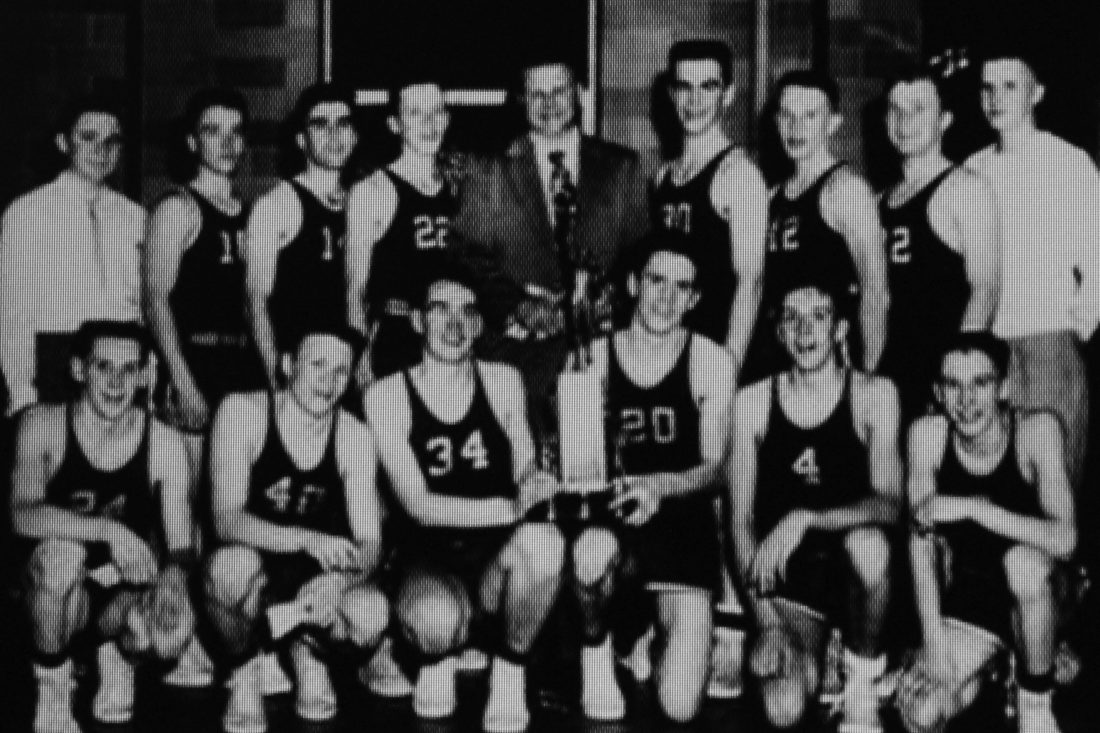 The 1957 Chassell High basketball team poses with its second straight Class D state title. Don Mattson is second from last, Terry Pokela and Tom Peters are next to him. (Courtesy Photo/Chassell Historical Society)

He’s too modest to ever admit it, but Don Mattson helped set the tone for excellence in Upper Peninsula athletics.

The former Chassell High basketball standout is best known for a couple of numbers: 65 and 3.

Those numbers cover the number of consecutive victories the Panthers attained between 1956 and 1958, while the three indicated the number of state championships won by CHS in the same period.

Terry Pokela, a key member of the 1956 and 1957 squads, said people everywhere knew about the Panthers success.

“All I had to say was that I was from Chassell and they would immediately bring up the 1956 game,” Pokela said in a 1996 interview. “And Donny (Mattson) was the guy who sparked that win and the rest of them.”

Trailing Portland St. Patrick by 15 points with under four minutes to play, things were dark indeed on that March evening in East Lansing.

Pokela and fellow forward Tom Peters had been lost to fouls earlier in the final quarter, leaving Mattson to lead the comeback.

“It looked pretty bleak right then,” Mattson said a few years ago. “But coach (Ed Helakoski) ordered us into a press and we got right back into the game.”

With Mattson scoring 12 of the 18 straight points Chassell notched in the comeback, the Blue and Grey scored an improbable 71-68 win at Jenison Fieldhouse.

“(Helakoski) was a master strategist,” Mattson said. “He had every play planned out. Just like he had every minute of our practices set up. There was no wasted time.”

The Panthers more or less breezed to another championship the next season. Mattson averaged 21 points, while Pokela and Peters each good for 17 points and 11 rebounds per game.

But with Mattson the only returning starter the next season, and keeping the streak going would get much rougher.

An early season game versus archrival John Doelle saw Chassell trailing by a 62-60 score with mere seconds to play.

“Doelle was always our main rival and they always gave us fits,” Mattson said. “I thought it was over right there.”

A basket by Don Michaelson of Doelle provided the lead in the game at the Houghton High Gym. Michaelson was the top scorer in the U.P. that season.

But reserve Bob Belhumer was fouled at midcourt as time expired, giving him a 1-and-1 chance at the free throw line.

Belhumer sank both chances to send the game into overtime and CHS won by a 72-66 score. It was the only OT game of the record streak.

Mattson, aided by Al Tormala, kept the streak going. He made a last-second shot to down tough Baraga by a 65-64 margin, and paced a 45-43 victory over Marenisco in the district finals.

Chassell kept going after that. They defeated a good Owosso St. Paul team for the title by a 68-61 count.

He attended Northern Michigan University for one year, but decided “college wasn’t for me.”

Don has been living in Ishpeming for some time. He and wife had three children. Oldest son, Troy, has been the women’s basketball coach at NMU for several years.

When the North Central broke the Chassell win record three years ago, Mattson was on hand at the clinching game to congratulate the Jets.

North Central upped the record to 83 victories before losing a game.

“I thought they (Jets) had a terrific team,” Mattson said. “And if someone was going to break our record, I was glad it was a U.P. team that did it.”