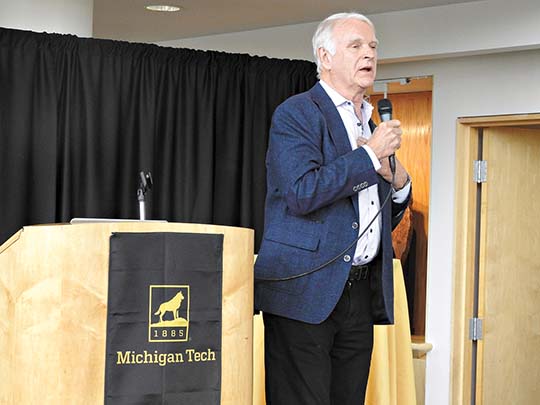 HOUGHTON — Michigan Technological University formally introduced its new College of Computing Wednesday with a ceremony at the Rozsa Center.

The event was part of Tech’s Computing Week, which also included an open house Thursday with demonstrations and a faculty forum.

The week came out of a desire to spotlight the need for computing at all levels, Minerick said.

“This is the first college of computing in the state of Michigan, and it’s one of a small vanguard of universities across the country,” she said after the ceremony. “It’s a really forward-thinking move on Michigan Tech’s part.

2019 is the first fall for the college, which the Board of Trustees approved in April. The move allowed the university to realign its computing-related degrees. They include programs in fields such as computer engineering, human factors and computational science, as well as convergence programs that cross multiple disciplines.

Minerick pointed to a U.S. Bureau of Labor Statistics prediction that 75% of jobs would involve computing by 2024. A large portion of those jobs will be in computer network and system administration, as well as software engineering, Minerick said.

“By us taking those degrees and pulling them together, it gives our students a huge advantage to understand the context with those others, and to have a broader sense of them,” she said. “We also pulled in electrical engineering technology, because they do the automation dimension of it. So mechatronics, robotics are all very closely integrated.”

The program came out of Michigan’s Tech Forward initiative, which began in Fall 2018. However, that decision was preceded by more than a decade of groundwork, Koubek said. The university started looking at its electrical and computer technology activities in 2012, and launched a computing division a year later. Two years after that, it established the Institute of Computing and Cybersystems, which has brought more than $7 million in grants and contracts to the university, according to the College of Computing website.

“I hope that someday, when you look back on your career, you appreciate the way that we do the impact in the change you have had on the trajectory of this institution,” Koubek said to the crowd Wednesday. “Because while we’re working on a lot of things, it’s hard to imagine something more important that has to succeed for us to succeed than the College of Computing.”

Minerick also introduced the college’s new recruiting video. The university is hoping to increase enrollment by 10% next year over its initial enrollment of 750 combined undergraduate and graduate students.

“We’re going to do that with personalized care and attention, as well as emphasizing the quality,” Minerick said. “Our graduates get jobs. They’re well sought after, they’re very successful in their careers.”

Attesting to that was House, a 1965 graduate of Tech, who also spoke at Wednesday’s events. He joined Intel in 1974, eventually taking its microprocessor business from $40 million to $4 billion annually.

His success was part skill, but also part timing. He said he had been lucky to graduate just as the Third Industrial Revolution was picking up steam. Though it started just after World War II, the breakthroughs did not reach critical mass until about 20 years in, he said.

The Third Industrial Revolution wound down by the mid-90s, replaced by the Fourth: artificial intelligence, neural networks, Big Data and the impact on the human experience.

About 20 years in, the first students in the College of Computing are in the same position House was.

“These are very fortunate students, because they’re catching the beginning of the wave — if they’re good, and if they’re lucky, they’re going to reap the same kind of rewards and satisfaction that I have,” he said.