Just a group of guys, having fun: Steve ‘n’ Seagulls love to perform, especially in the Copper Country 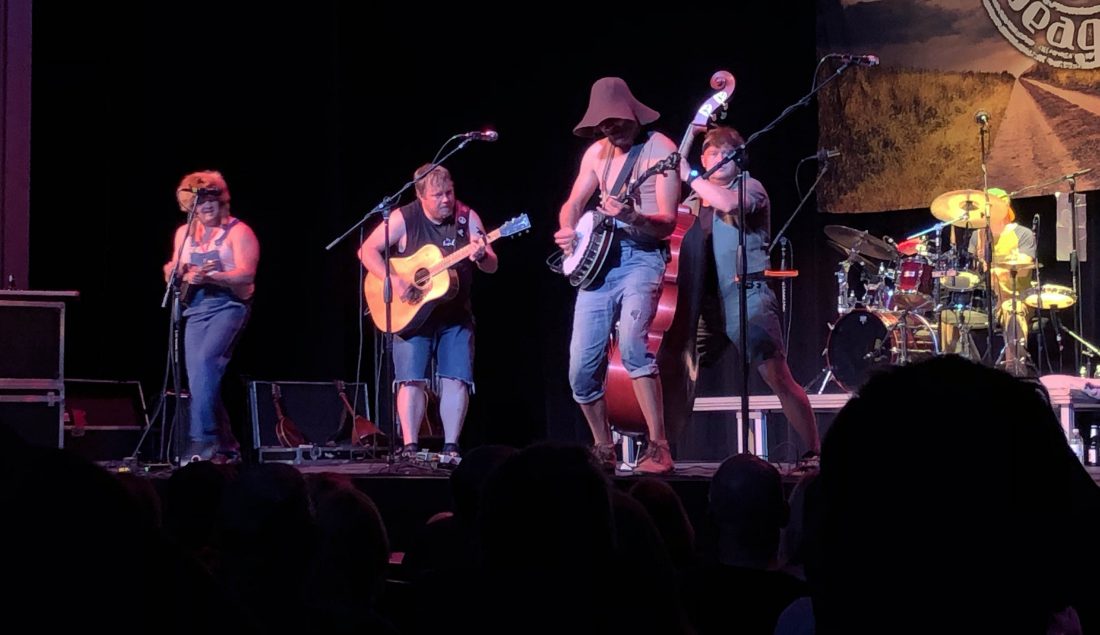 HOUGHTON — As the lights dropped down and shadowy figures stepped onto the stage at the Rozsa Center Wednesday evening, Alan Silvestri’s score from Back to the Future filled eardrums. Those ears were anxiously awaiting the arrival of a motley crew of characters who later spent the better part of two hours filling those ears with some songs they know, some songs they don’t, and some that are clearly just the band having fun.

One thing is certain, the bluegrass band Steve ‘n’ Seagulls love what they do.

“At some point, we just wanted to try bluegrass instruments. I started with the telecaster and at some point, I bought a banjo and I started learning that and it just felt like so much fun playing the Trooper riff on banjo, (which) was hilarious,” said Herman, the band’s banjo player. “Other guys played like double bass, mandolin, you name it. So all that just felt like real fun.

“That’s always a lot of fun. We take music really seriously, even though it’s fun, but we spend a lot of time practicing and making arrangements and thinking about music. It’s a really big thing.”

As the initial notes to the Guns N’ Roses classic song Paradise City, and the lead vocalist, Remmel, broke into the first lyrics, it was clear that the Copper Country was in for a night of high-octane bluegrass with songs ranging from the aforementioned Guns N’ Roses to Foo Fighters and AC/DC. The show was unrelenting in moments, soft and delicate in others. It all comes back, though, to how much this group of Finnish natives enjoy playing music, especially with each other. 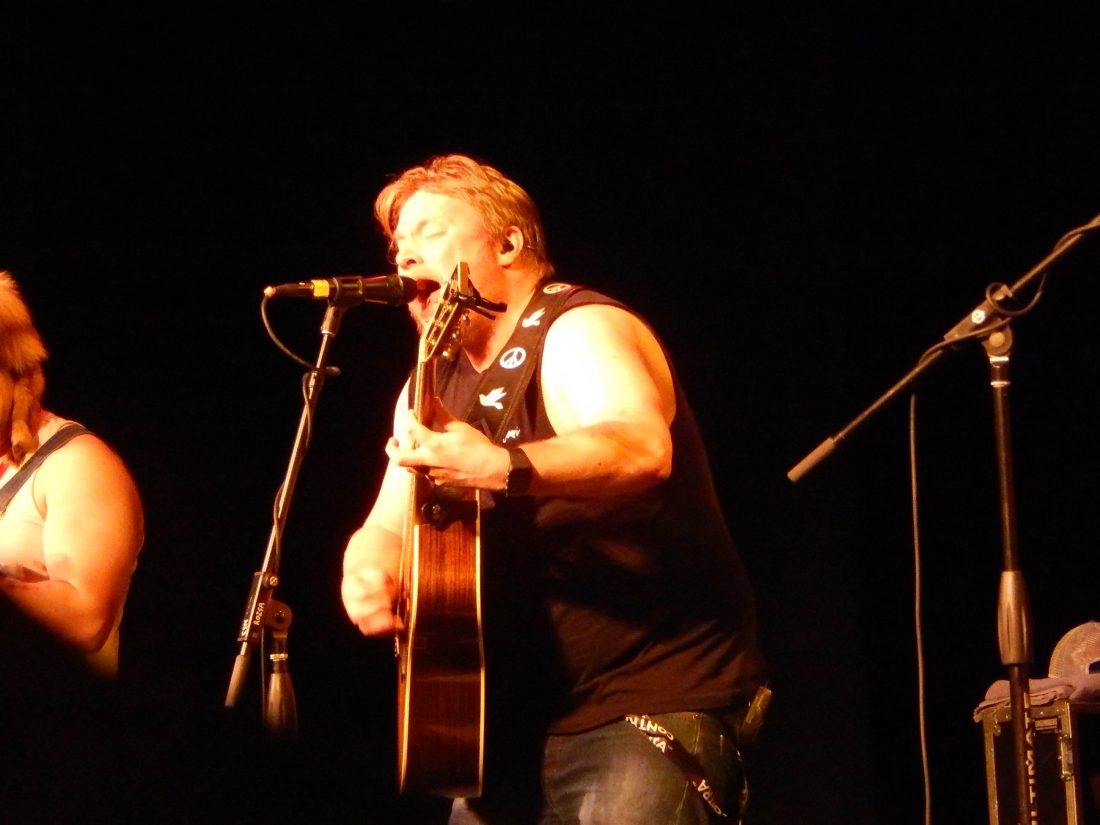 (Daver Karnosky/Daily Mining Gazette) Remmel, lead singer of Steve’n’Seagulls, sings out during the concert Sept. 4 at the Rozsa Center.

“We used to study in the same city and we had like different bands and projects we played at, and many, many kinds of music,” said Herman. “We used to play that. At some point, a booking agent wanted us to do like a short tour with a country western theme. So that’s how Steve ‘n’ Seagulls started. It was like, way different than (it) is nowadays, the whole style outfit and all that was more like a spaghetti western.”

Hailing from Jyvaskyla, Finland, musicians Remmel, Herman, Hiltunen, Pukki and Puikkonen were brought together to play a group of 15 shows as an opening band for a country western show. At the time, all five were parts of other musical acts, but over the course of that tour, they discovered something important about themselves.

“We were supposed to do like, 15 shows, and that’s it,” he said. “But it just felt so fun that we kept on doing shows, and at some point, we noticed that okay, this is the only band we’re playing.”

From there, Steve ‘n’ Seagulls became something bigger than just a side project. As bands evolve, some members stay, others go. Fairly recently, the quintet added Jamppa, a bassist, and Skubu, a drummer, to replace Pukki and Puikkonen. Herman feels that the current iteration of the band actually feels like a group that has been together for years.

As a band, Steve ‘n’ Seagulls really started to take off when their rendition of the classic Iron Maiden song, The Trooper, went viral on YouTube in 2014. 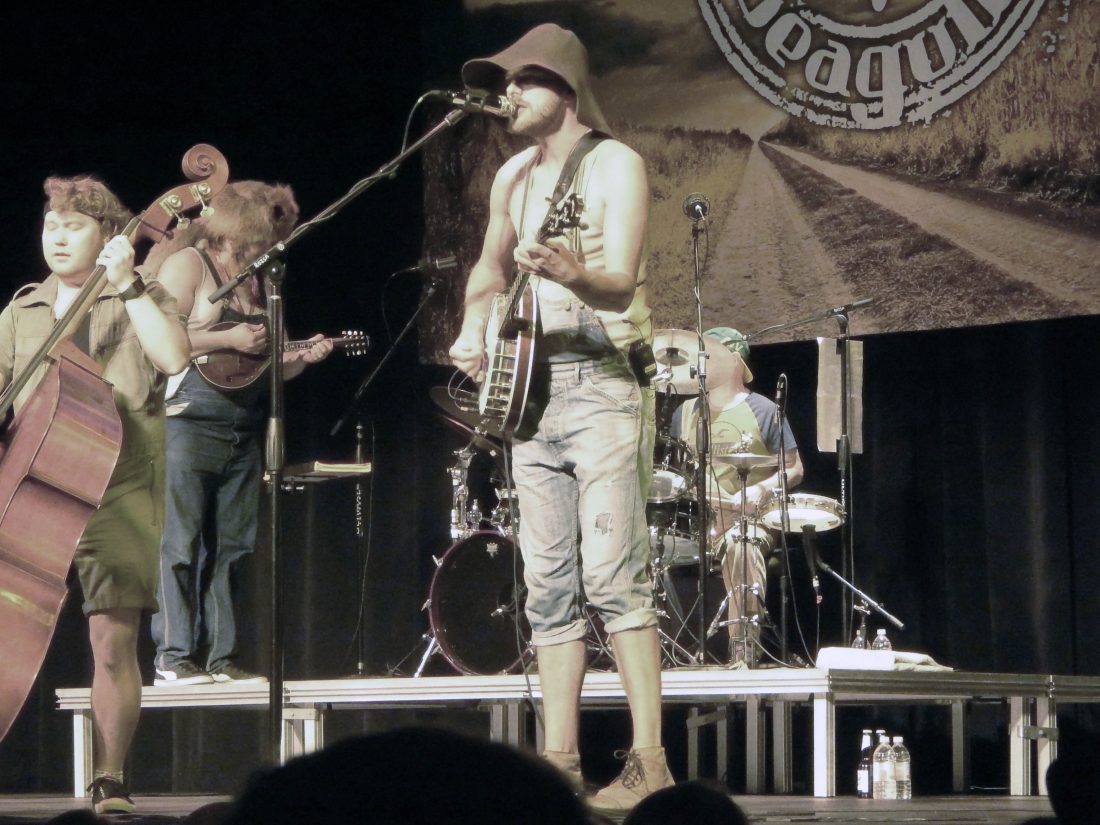 “At some point, we just wanted to do a video for the booking agent, just to let them see what’s going on with the band,” said Herman. “At that time, there was a lot of live videos online. We had that idea that we wanted to do that sort of video that we could just put that online and something happened.

The video they created has nearly 13,200,000 views today. Viewers are still commenting on the video with the most recent actually going live in the past week.

A little over a month later, they dropped what might be their most popular video ever. Viewed nearly 88,000,000 times by now, it opens with Hiltunen riding over to his bandmates on a lawnmower while holding an accordion. That is followed by Herman strumming the banjo as the familiar opening to AC/DC’s Thunderstruck can be heard.

From there, the rest is history.

(Daver Karnosky/Daily Mining Gazette) Remmel, lead singer of Steve’n’Seagulls, sings out during the concert Sept. 4 at the Rozsa Center.

When Steve ‘n’ Seagulls arrived in Houghton last fall for their first performance in the local area, they were unaware of three facts: that the area was still recovering from the Father’s Day flood of 2018, that the area had such a strong connection to Finland, and that the area had a tremendous amount of mining history, something that Finns take pride in.

After performing, the band got out and met fans in the Rozsa Center Lobby. There, they began to discover that area residents had multiple family members who not only spoke fluent Finnish, but in some cases, they passed their knowledge of the language on to their children.

“Well, this is a really special thing,” Herman said about finding people who share his native language here, “because there’s a lot of people with Finnish origin.

“It feels like home when you come here. The landscape and all, it reminds us very much a Finland.”

They spent another day in the area after their concert, and they discovered how rich the copper mining history is. While visiting local copper mines, they shot a music video for their rendition of House of the Rising Sun originally performed by The Animals.

“The copper mines, that was a really unique experience to see real copper mines here,” said Herman. “We don’t have those in Finland, like real old, so it was amazing.”

The band had so much fun making the video with Ponsse North America, they decided to record another before they left town this year.