Tech, ASU players and coaches get after it following Tech’s 5-3 win 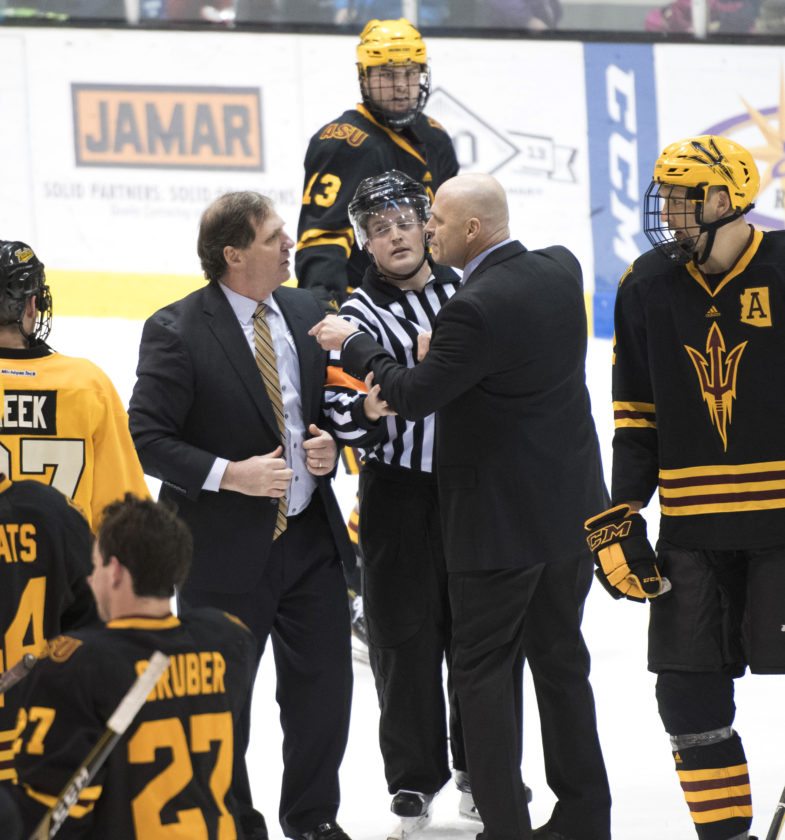 HOUGHTON — Joel L’Esperance didn’t even know what happened. The senior forward bent over to pick up the puck after Michigan Tech’s 5-3 win over Arizona State. He was planning to take it into the locker room where the Huskies would award it to their chosen player of the game. But when he turned around, L’Esperance was greeted by a full on brawl.

So he did what any hockey player would do: He got in on the action.

“I turned and all of a sudden everyone was going at it, so I just grabbed a guy,” he said.

On Saturday 3,733 people came to watch the Huskies take on the Sun Devils in the MacInnes Student Ice Arena. They paid for a hockey game — and they got one — but the real excitement happened after the final whistle blew.

The game was physical from start to finish, with 24 penalties being called, but nothing, not even a little skirmish, or occasional tussle broke out during the contest. Then, when the game was over, a fight erupted in front of Tech’s net. Several players from both sides were involved, but after a few punches, officials seemed to have things in order.

When Tech and ASU made their way to the handshake line, the previous fight turned into a brawl, and everyone got involved. Things escalated even more when ASU assistant coach Alex Hicks grabbed Tech Coach Joe Shawhan in a headlock. Head coach Greg Powers grabbed him from the other side, and moments later officials were pulling Powers and Shawhan apart as the two held on to each other’s collars, locked in a screaming match.

When things finally fizzled out, the Tech student section sent ASU off the ice with chants of “Just go home.”

It was a confusing finish for two teams with seemingly no history. There are 2,012 miles between the schools, the coaches — both goalies — never met during their college careers,and Arizona State is new to Division I, so Tech hasn’t played the team until this season. The Sun Devils and the Huskies have met three times this season, with no conflict in either previous matchup. But after Saturday’s showdown, a fourth matchup seems unlikely.

At least from Powers’ perspective.

“Their coach took the liberty of coming onto the ice and going after one of our players,” Powers said. “That is unacceptable. It is unacceptable on every level. It’s the oldest rule in the book; you don’t go at a player on the opposing team, you don’t talk to a player on the opposing team. He not only did it, he got on the ice and came after him. It is absolutely bush league, and doesn’t surprise me with that guy,”

“That guy” was Shawhan, who didn’t understand the outrage, saying things got blown way out of proportion. From his perspective, it was more of a misunderstanding than anything else.

Of course, before punches were thrown, a game was played, and Tech defeated ASU after losing in both of the previous matchups; the first in the Ice Vegas Invitational Championship game on Jan. 6, and the second on Friday.

The fight took a few minutes to break up, but the actual game was decided in 14 seconds.

It was 3-3 in the third period when Gavin Gould forced ASU to turn the puck over in front of its net. L’Esperance came up with it and Gould was perfectly positioned to score. He tapped it in for his 12th goal of the season.

Then, 14 seconds later Dane Birks put the game away, scoring his fifth goal of the season on a fluke play.

Birks was lined up in front of the Tech bench and slapped the puck toward ASU’s goal in an attempt to create an offensive set. Instead, the puck ricocheted off the board and into the net as Daccord was coming out to play what he thought would be an easy puck.

“We ended up giving them their fourth back, and then they got that ridiculous bounce,” Powers said. “That happens. It’s hockey, but it is what it is, and it is a tough place to play.”

To start the game, Tech (16-14-5) and ASU (8-19-5) looked to be heading to the first intermission in a scoreless tie, but a defensive breakdown by the Huskies with 16 seconds left in the frame gave ASU a 1-0 lead. Brinson Pasichnuk scored his first goal of the weekend, and seventh of the season.

Tech then jumped out to a 3-1 lead in the second period when L’Esperance and Mark Auk each scored a power-play goal, and Dylan Steman tacked on another.

But anyone who has watched Tech this season knows the Huskies never make it easy on themselves. And just under four minutes into the third period, it was tied once again. Johnny Walker scored twice for the Sun Devils.

The Huskies have led and then lost or tied 12 times this season, and Saturday looked as though it could be unlucky No. 13 as Walker netted his second goal. But the Huskies found it in themselves to regain the lead.

“We had some resiliency, but we got a really lucky bounce,” Shawhan said referring to Birks’ goal. “They have a tremendous goaltender, he had a great weekend, and it is unfortunate for him that the bounce happened. It was unfortunate for him, but a lucky break for us. I didn’t think we dominated or anything like that. It just felt like it was a grind.”

The Huskies outshot the Sun Devils 45-23 in the contest.

Tech has two regular-season games left, both against rival Northern Michigan before taking on Bemidji State on the road for the WCHA playoffs. At this point, Shawhan has retired the hope of building momentum. The Huskies just can’t seem to do it, but they will need to string together a few good games, or their season will end at Bemidji — and quickly.

“We have shown with our team every game is a game in itself. I’m not sure we are a team that has shown we can build momentum and ride it,” Shawhan said, “We just have to keep grinding and take every game as it comes. We are awfully late (in the season) now for playing the way we play.”

Next up Tech travels to NMU on Friday at 7 p.m., before hosting the Wildcats for the senior night game Saturday at 7:07 in the MacInnes Student Ice Arena.