Puzzle piece: Patton is first piece in next step for Lions 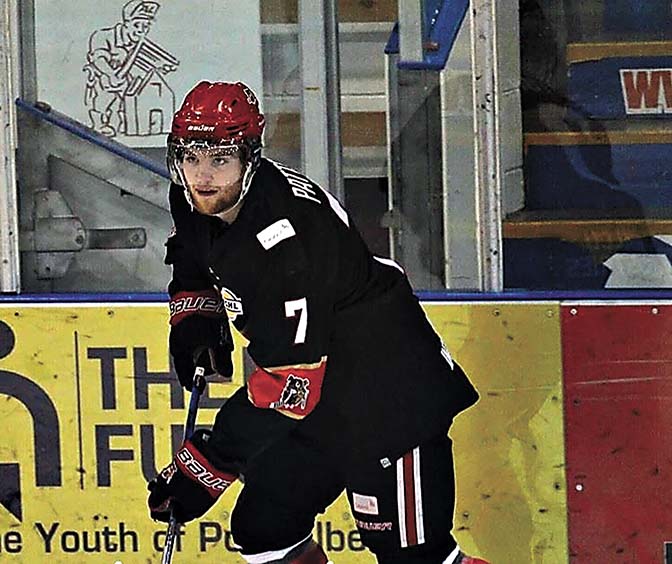 Provided photo Nanaimo’s Lucas Patton looks for a player to pass to during a game this season. The Sechelt, British Columbia, native looks to be a first piece in an impressive group of recruits for Finlandia men’s hockey, who is looking to build on a playoff run last season.

HANCOCK — Three years into his second tenure with the Finlandia Lions men’s hockey team, coach Joe Burcar is still searching for the right pieces to continue his hard work that has already begun to pay off with a playoff series this past season.

Left handed defenseman Lucas Patton looks to be the next piece in that transition as the Lions continue to move forward. Burcar and his staff zeroed in on Patton due to the fact that he fits several categories for the Lions, he shoots left handed, he can move the puck quickly out of his own end and he does not shy away from physical play.

Oh, and he is excited about the direction the program is heading. Of course, it also helps that Finlandia had the types of academic programs he was interested in as well.

“Through a lot of research, I found out all of these programs that they had were fitting my character and my desires,” Patton said. “After finding that, I figured it was a fit for me.

“Also, after meeting with Coach Burcar and seeing the rise, it made me want to contribute to the team. It makes me motivated.”

In short, he is exactly the type of player assistant coach Micah Stipech wants.

“One of our biggest needs was for a left handed defenseman,” said Stipech. “(Our) overall recruiting philosophy is to find players who are competitive and smart. If we have smart and competitive players, those are the guys who can bridge the gap, even the playing field and take us to the next level.

“This kid has all the good tools that you like in a defenseman. He is a defenseman who matches up with other teams’ best players. I love that he sees the ice and makes, quick, hard plays and simple passes.”

Patton has spent the majority of the past two seasons with the Nanaimo Buccaneers of the Vancouver Island Junior Hockey League, which is the same conference that helped develop current starting goaltender Marcus Gloss and defenseman Dylan Paavola.

The two-way defender also played parts of the past two seasons for the Alberni Valley Bulldogs and the Nanaimo Clippers of the British Columbia Hockey League (BCHL). While he did not register a point in 19 games over two years at that level, Patton felt the experience was worth it.

“I enjoyed my time in the BCHL, especially my time in Alberni,” said Patton. “I would not trade it for anything.

“It’s exciting to see players move on (to college).”

Born in Sechelt, British Columbia, Patton grew up northwest of Vancouver and across the water from Nanaimo, which was where he spent most of his junior career. Sechelt is also the hometown of former Michigan star and NHL winger David Oliver.

Patton played midgets for the Vancouver Giants, the same program that has produced NHL regulars like Colorado’s Alex Kerfoot, Edmonton’s Ryan Nugent-Hopkins and Buffalo’s Sam Reinhart along with a number of quality college hockey players as well.

With the Buccaneers, Patton has developed his two-way game considerably, scoring just five assists in 28 games in 2017-18 before blossoming with seven goals and 22 points last season.

“Lucas has become a very steady two-way defenseman,” Toneff said. “His defensive side of the game has always been in-your-face. He is a do-whatever-it-takes-type of player and teammate.

“He has developed great offensive instincts as well over the past few seasons and seems to jump into holes in the offensive zone at the perfect time.”

Toneff and his staff chose have Patton wear a letter on his jersey this past season and he believes that the 19-year-old will quickly develop into a leader at Finlandia as well.

“Lucas was a leader from Day One with our program in Nanaimo, and I fully expect Lucas to be the same with Finlandia,” said Toneff.

Stipech, who admits that he felt very passionately about Patton, echoed Toneff’s appraisal.

Stipech likens Patton’s game to that of longtime NHL defenseman Dan Hamhuis. Currently back with the Nashville Predators, Hamhuis has also spent time in Vancouver and Dallas and has proven to be a steady, two-way defender who can perform on the power play and shorthanded, making him an asset in every situation.

“He’s a very good skater,” Stipech said of Patton. “He is strong enough (to handle the forwards we see). He can really do it all.”

Stipech envisions slotting Patton in alongside either Paavola or Cory Richardson next season, believing the youngster could free either up to push their offensive instincts.

“In a shutdown moments, I can shutdown the game,” said Patton. “In offensive moments, I tend to do well.

“I believe that, I can honestly say that I am a two-way defenseman contributing at both ends of the ice.”

The Sechelt native grew up far enough away from Vancouver that most of the rinks he skated on were very similar to the Houghton County Arena, which is good news for Burcar and his staff, as that means that Patton feels very much at home in a smaller building, especially one like the “HoCo,” where there is very little room to hide.