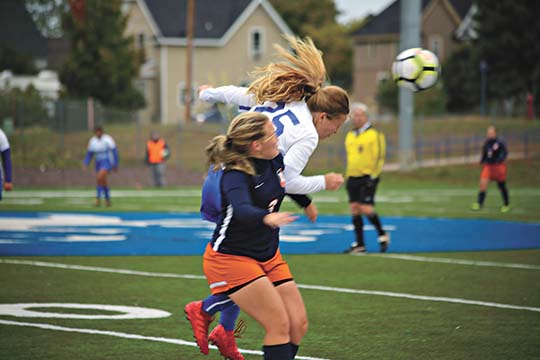 Photo provided by Finlandia Athletics The Lions’ Bethany Fehr (25) attempts to defend against a Lumberjills player during a game last season at McAfee Field.

HANCOCK — On Monday, the Finlandia Lions women’s soccer team welcomed new leadership in head coach Grace Sokolow, a native of Parker, Colorado. The Lions are a NCAA Division lll team, so Sokolow finds herself in familiar territory, having both played and coached in Division III in New York and Texas, respectively.

“I played Division III soccer myself,” she said “I played at a school called Veteran (New York) and then my previous job before this was coaching Division III (soccer) at a small school in Texas, so this sort of small school, small program, it’s where I came from and it’s what I know.

“I knew when I wanted to take the next step in my career. I wanted to stay at a small school in a small community. What attracted me to Finlandia was the school and the community.”

“I’m looking forward to fully integrating myself into not only the Finlandia women’s soccer program, but the school itself (along) with the larger community of Hancock,” she said.

The 2018 season was one for the record books for the Lions. They had one loss to a Division II school in Northern Michigan in early September during their regular season. The remaining three losses the Lions suffered came during the postseason in November as the Lions fell to Bethany Lutheran, Adrian, and conference champion Thomas More to close out last season with a record of 11-4-1.

Sokolow looks to build off of the success of last season with a one game-at-a-time mentality. The 2019 regular season will see the team play seven home games and ten away games.

“We’re definitely looking to build off of the success of last year,” she said. “The previous head coach did a great job building it and now we’re just looking at moving forward. I think what were going to focus on this year is doing all of the little things right and holding one another accountable for out successes and our failures.

“We’re going to try and build a culture where we expect to win, but (also) we win the right way. We’re going to keep the squad as it was last year and we do have some newcomers coming in. Most of them committed before I came on board.”

With a number of returning players and the few newcomers, Sokolow hopes to build up to a strong postseason presence much like that of previous coach Jordan Andrews.

“We’re going to do the best job we can (when) integrating those new recruits into our returning (squad),” she said. “As we look forward to look forward to future classes, my goal is to build on what Jordan left. Hopefully I can get some Colorado kids up here too.”

Summer does not tend to stick around late into the soccer season. When asked how her squad would rise to the challenge of weather conditions, Sokolow’s answer was simple: “We play, rain or shine.”

“We’ll do our best to try and control things like our fitness and our preparation and out mindset and we’ll let the weather do it’s thing.”

Sokolow has a very definite goal for the season.

“I think the biggest goal is to return to the conference tournament, but for me and this squad in particular, we want to have a better game then we did the game before,” she said. “The mistakes that we make in Game One we want to fix in Game Two. Then, if we make mistakes in Game Two, we want to fix them in Game Three.

“So we want to be firing on all cylinders when it gets to be conference time and just (see) consistent improvement and constant growth.”

The importance of the game lies in the lessons it teaches to Sokolow and her team.

“Coaches are teachers. We just have classrooms that look a little different, so I try and teach the game, but I also try and use the game to teach life lessons,” said Sokolow. “I think soccer is a great conduit for learning things about the rest of the world.

Sokolow welcomes the community’s support this season as the Lions will play their home opener against Adrian at McAfee Field at 7 p.m. on Aug. 30.