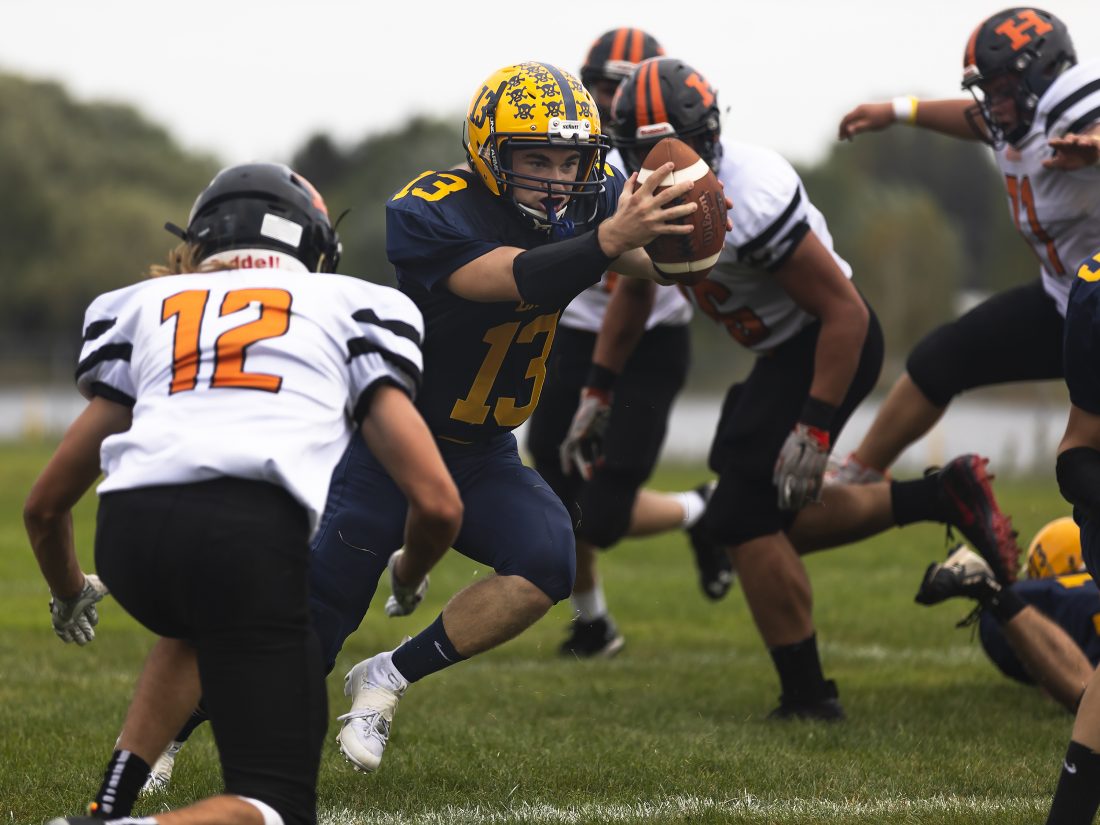 LAKE LINDEN — It wasn’t what you’d expect, what with the disparity between the two schools’ enrollments.

The Lakes (3-1) are the smallest school in Michigan playing 11-player football — smaller even than a couple UP eight-player schools — and Houghton is 44 students shy of being a Class B school.

But none of that mattered Saturday. Lake Linden-Hubbell showed it with a dominating performance.

The Lakes held Houghton (0-4) to just 93 yards of total offense and three first downs on the day. 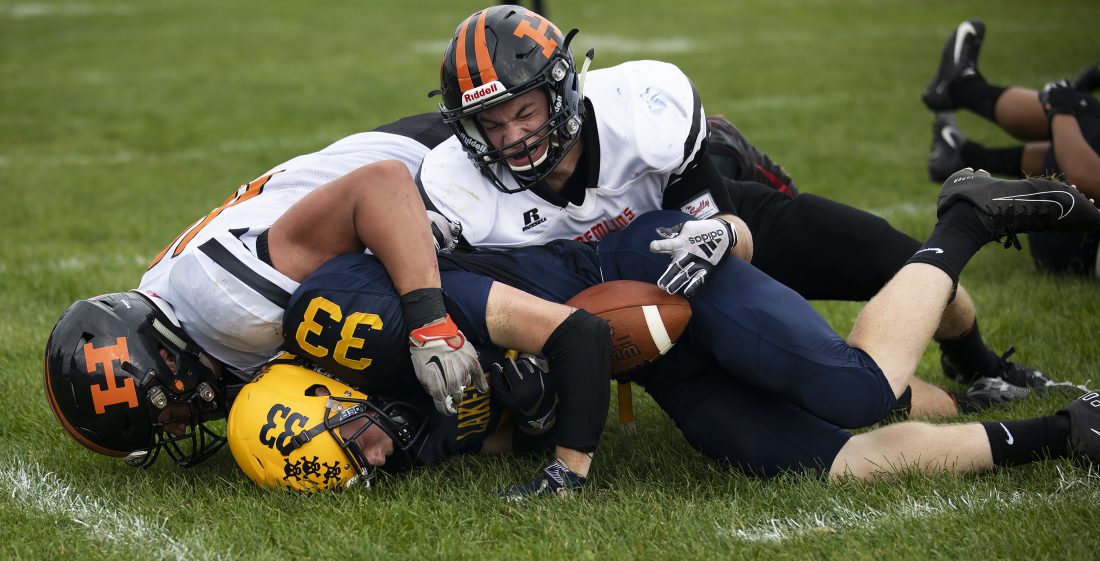 Houghton dropped to 3-16 against the Lakes going back to 2000. Lake Linden-Hubbell has outscored the Gremlins 544-192 in that stretch.

Houghton, at 436 students, is nearly four times the size of LL-H’s 131 students. But Lake Linden-Hubbell, with 382 yards of total offense, had four times as many offensive yards and nine times as many first downs — 27 total

After a scoreless first quarter, senior quarterback Carter Crouch, with a torn right ACL wrapped tight in a brace and tape, scored the Lakes’ first touchdown from one yard out. 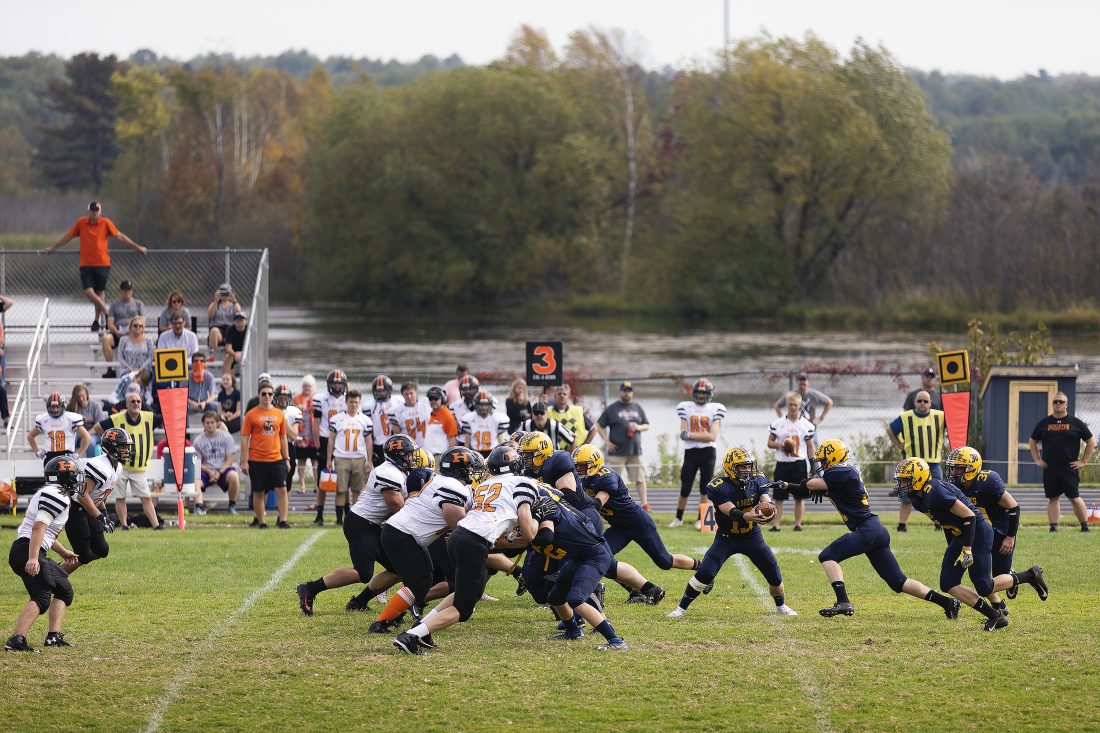 Crouch left the game with 3:55 remaining in the second quarter after going down at the end of a run. Coach Crouch, Carter’s father, said his knee shifted. Carter leaned on a crutch the rest of the game with ice wrapped around his knee.

Brandon Lavigne, just as he had after Carter went down with the injury on the very first play of the team’s preseason scrimmage, filled in at quarterback.

“He was cleared to play. This is something that he wanted to do. That’s fine,” Coach Crouch said. “What happened to him today, we knew was a possibility. He’ll be back next week. His knee shifted. It’s what we’re going to deal with if he wants to play. Having him on the field as a coach is awesome and as a dad it was really, really nice to see him out on the field being a leader.”

Huffmaster said his team has had to reorganize the depth chart because of injuries. Ty Halonen’s wrist fracture forced the team to dip into younger inexperienced talent. 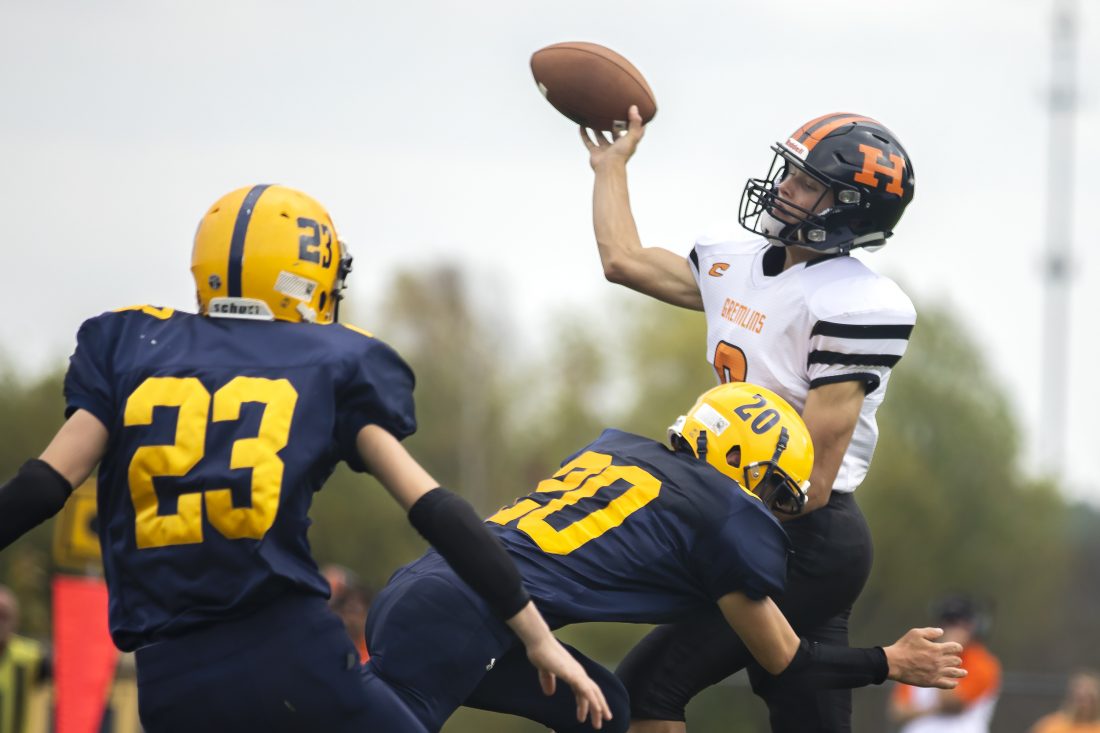 “We had a lot of people play that wouldn’t normally,” Huffmaster said. “We just gotta get back to competing and get our assignments done. We can win the next win. We should’ve competed in this one.”

Crouch said his team made adjustments at the line during halftime that helped the Lakes pile on 28 second-half points.

Caleb Klein led the Lakes with 109 rushing yards on 21 carries and a touchdown. Caleb Gregoire had 106 yards on 12 carries with a touchdown. Lavigne rushed for 67 yards on nine attempts. 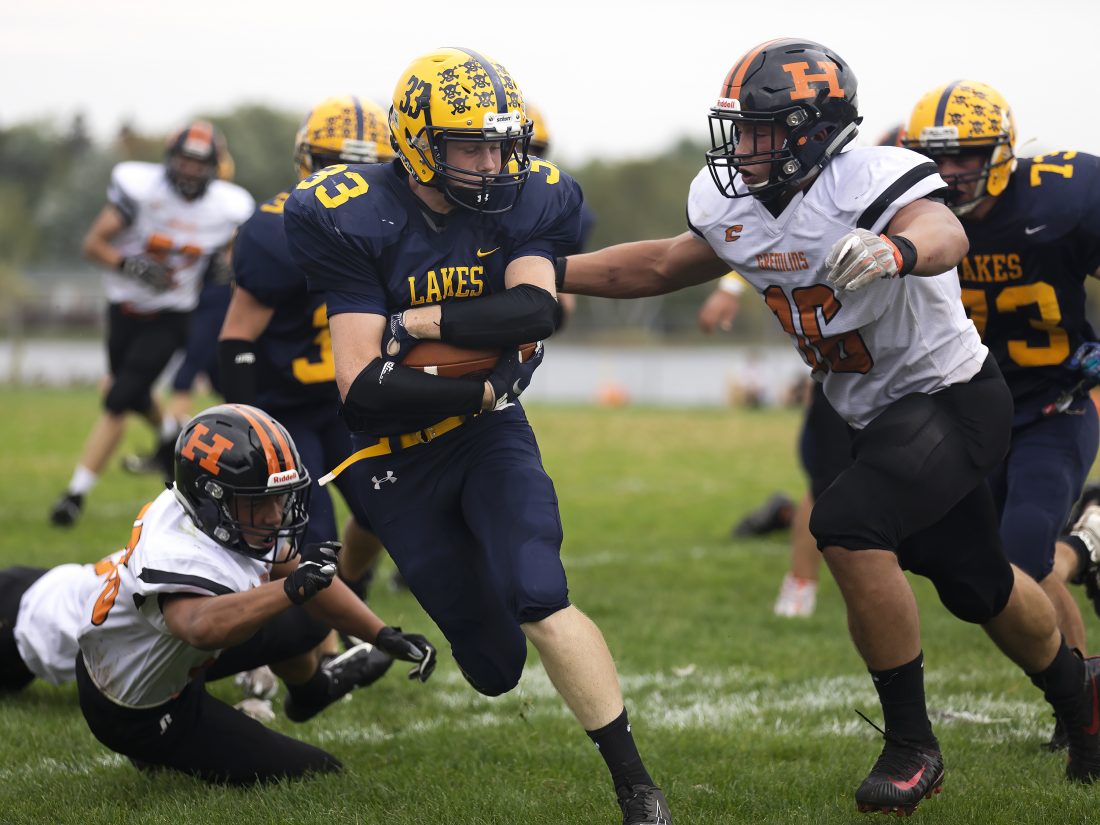 Check the scoreboard section on page 2B for statistics and scoring summary. 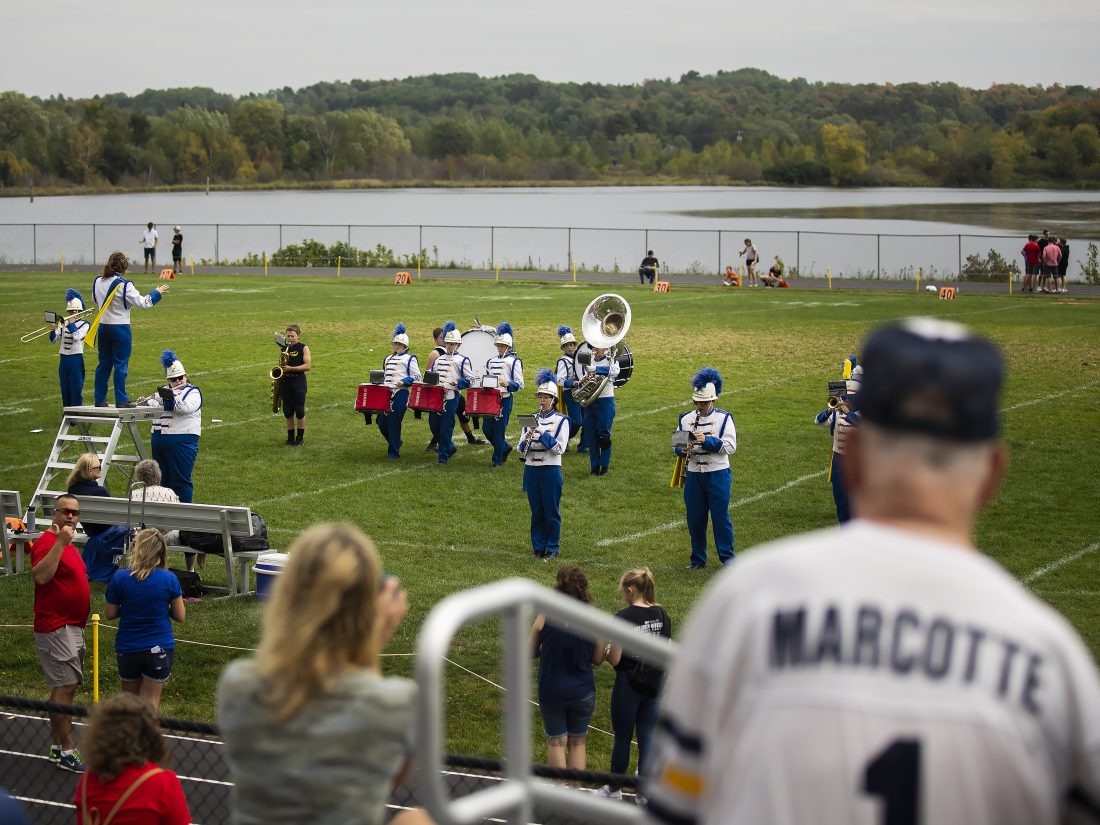 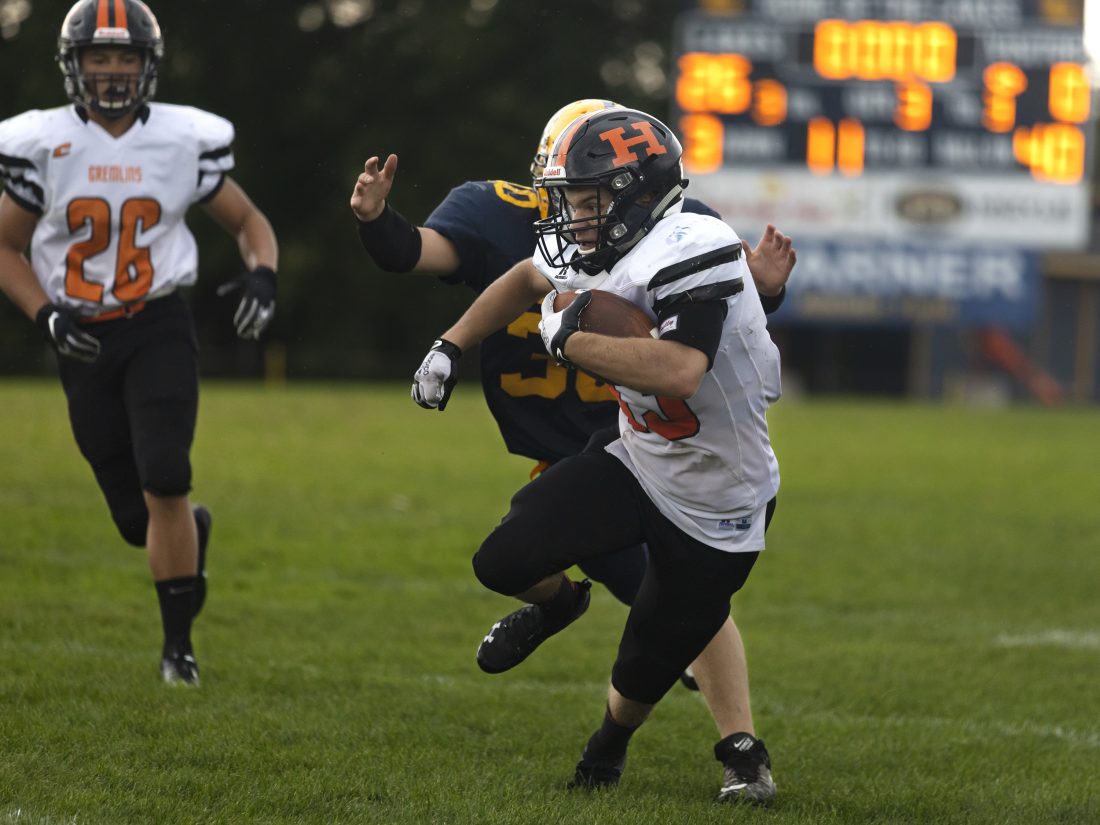 The WCHA will be a team short this season. Alabama-Huntsville eliminated its hockey program on Friday as a part ...