Jets get revenge on Cardinals; seeks 1st ever regional title 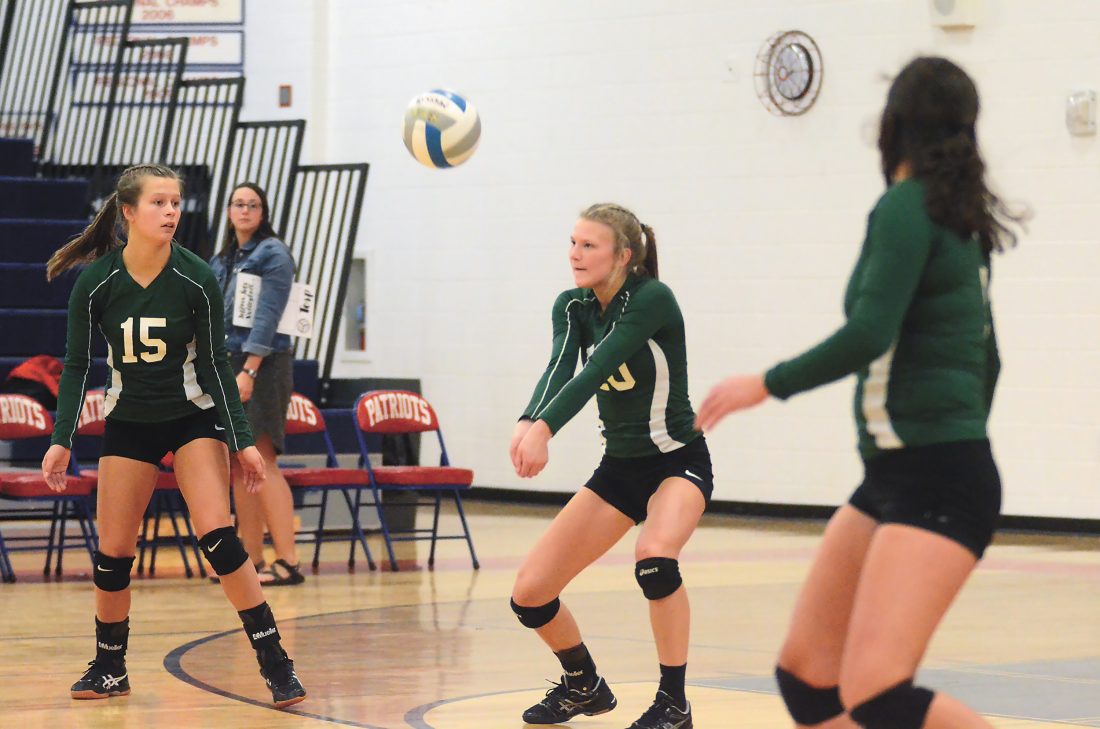 ISHPEMING — Being that Tuesday night’s volleyball match between Wakefield-Marenisco and Jeffers was a rematch of last year’s five-set thriller in the district semifinals, things were bound to be just as entertaining this time around.

Especially since the stakes were even higher, the two teams meeting this time in an MHSAA Division 4 regional semifinal played at Westwood High School in Ishpeming.

The Cardinals took last year’s tilt, but the Jets earned some sweet revenge on Tuesday, topping W-M in four sets to advance to Thursday’s regional final against Carney-Nadeau.

The Jeffers-Carney-Nadeau match is set for 7 p.m. Thursday at Westwood High School. The winner advances to the state quarterfinals at 7 p.m. Tuesday at Sault Ste. Marie High School. The opponent will be either Rudyard or Onaway, playing in Thursday’s regional final at Cheboygan.

Senior experience paved the way for the Jets, who received 11 kills and three aces from Marissa Nordstrom and 10 kills and 17 assists from Brenna Hill.

Jeffers head coach Rachel Torp said the key to the match was stopping W-M’s strongest hitters, as well as finding the corners on the floor.

“We’ve went up against them a couple of times, and the last time around, we went to four sets and lost to them,” she said. “We knew going into this, we had to stop (Wakefield-Marenisco junior) Carlee Yon. She’s such a strong hitter and we knew that we had to double block on her.

“We came through on three of the four sets. In the second set, we just kept making silly mistakes and couldn’t get back into it. The other sets, we saw the corners that were open and capitalized on that, just pushing corners and finding the open spots.”

Torp added it was nice to get some revenge after a wild match against the Cardinals last year.

“We went to 36-34 in one of the sets with them last year,” she said. “We had also lost one of our main girls in Marissa. This is total revenge, but that was districts and this is all the better.”

It’s also only Jeffers’ second year with a varsity program, and the Jets have never seen Carney-Nadeau, who won the first match of Tuesday’s doubleheader 3-0 over Mid Peninsula. Therefore, it presents a new challenge for Torp and her team.

“I’m just so proud of our girls, this is so great. This is only our second year having a program, so to make it to the regional finals is amazing.”

Wakefield-Marenisco head coach Jessica Novascone couldn’t be reached for comment after the match.

The crowd came out in force for this one, with dueling student sections as loud and energetic as could be, and that crowd was treated to quite a match, especially over the final two sets.

Jeffers all but cruised in the first set, before W-M returned the favor in the second set, which both ended on errors.

Intensity picked up in the third set with each team refusing to budge. The score was tied 13 times, with neither team able to pull away. The Cardinals at one point went up 7-3 on back-to-back aces from Cloe Bachand, but the Jets countered with the next four of their own, including kills from Hill and Nordstrom, an ace from MaKenna Harris and a block from Nordstrom.

Later on with Jeffers up 18-14, W-M went on a six-point run to go up 20-18 before kills from Harris and Nordstrom knotted the score up again.

Tied 22-22 shortly after, the Jets rallied for the final three points on two kills from Nordstrom and an ace from Mara Pietila to end the set.

The fourth set was just as tight with the teams slugging it out to a 24-24 deadlock. Just before that, with the Cardinals down 21-18 and their season on the line, an attack error, double-hit violation and an ace from Bachand tied things at 21-21 and forced Jeffers into a timeout.

W-M got the next two points out of the timeout, with a kill from Yon and another ace from Bachand, before the Jets managed to get things even yet again on a service error and attack error.

Jeffers took the lead on another attack error to get to match point, before a kill from Wakefield-Marenisco’s Kayla Londo kept their season alive, but not for long.

That’s because the Jets tallied the final two points on a kill and block from Nordstrom to send her team to the regional final.

Harris finished with three kills and seven aces for the Jets, while Pietila had five kills with Jersey Hoover adding four.