Tech to bid adieu to only baton twirler 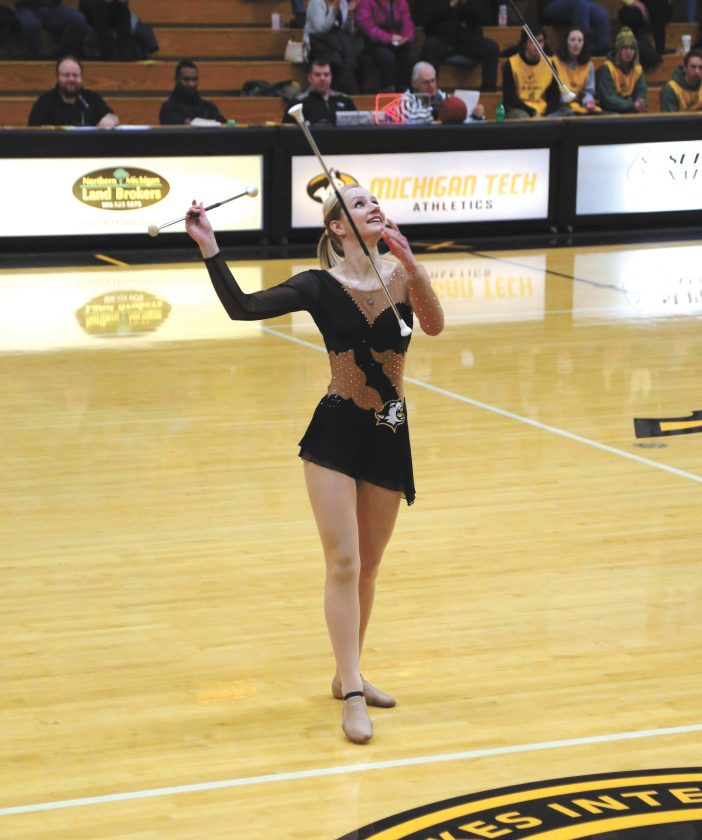 HOUGHTON — At the University of Florida, more than 20 young ladies twirl the baton for the Pride of the Sunshine Marching Band.

At the University of the Tennessee, their majorette line consists of eight twirlers. At Michigan Tech University, there is just one and she is just about to graduate.

“It has been a wonderful experience,” said Madison Stachowiak, who has been performing with the Tech pep band at the school’s football and basketball games for the past few years. “The pep band has welcomed me with open arms since day one. They are a great group of people.”

Stachowiak, 22, transferred to Tech in part by an invitation from the university’s director of bands, Mike Christianson. She began her college career at Saginaw Valley State University studying wildlife ecology. When they dropped her major after two years she learned of MTU and their wildlife program.

“I was not twirling at Saginaw Valley, so when I got in contact with Tech and Mike Christianson, it was a win-win situation,” said the Walled Lake native. “Not only did they have my major, but Mike was very excited to have me. He told me that the band had had twirlers in the past but not one since he had been at Tech. So we would navigate this together and we did.”

Part of that navigation was coming up with an official one-of-a-kind (literally) costume for performances.

“I was able to design my costume down to every detail. I chose sleeves because I knew the football games would be chilly,” she said. “I had a mesh skirt on the bottom because I like skirts, and I put all the rhinestones on myself. I also got to choose which style of Husky logo I wanted on there to represent the school.”

Stachowiak added that with the rhinestones, it ended up being close to a $500 outfit.

“I’m thankful that my mom was supportive and wanted to pay for it to celebrate me being a feature twirler,” she said.

As for performances, she was at all the Saturday-afternoon, home football games and a handful of basketball games. At football she was on her own performing alongside the pep band. She kept up her skills in between games by practicing by herself at the SDC.

When basketball season arrived her performances were a little different. Stachowiak was center stage performing solo to recorded music except for her last performance. That afternoon at the Huskies last home game of the year, she twirled away at mid court while the band serenaded her to the tune of “Brown Eyed Girl” by Van Morrison.

“That was a special moment,” she said. “It was very sweet, and the band did not have to do that.”

She hopes graduation isn’t the end of her twirling career. It is a career that began when she was just 6 years old and found herself admiring her one and only older sister who was a twirler.

“I would go along and imitate her,” she said.

She started competing at age seven and advanced in the world of baton twirling through her local club to the point that she was competing in state and national competitions in high school.

“I was one of the top three twirlers in the state of Michigan my sophomore year and was able to compete at the national event at Notre Dame,” she said. “That was very special as I place in the top ten in a number of events.

Stachowiak said she is eager to see where her job takes her after graduation. She shared that she would like to stay here in the Upper Peninsula. She has put in a number of applications with the area Department of Natural Resources with hopes of making that a reality.

“I have fallen in love with this place, and I would love to start a twirling club here,” Stachowiak said. “In fact there is quite a bit of interest in such a group as I have done some informal research.”

“It is really important for me to continue this and pass it along to the next generation as it is such a unique sport,” she said.