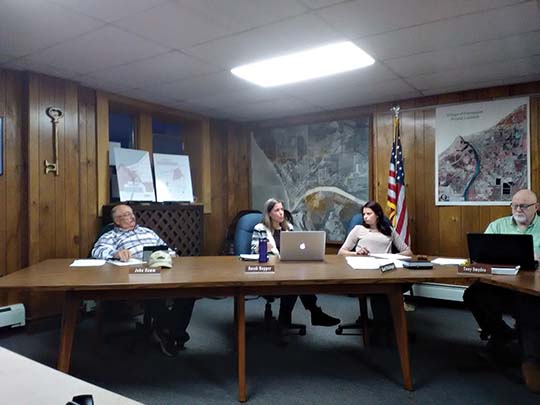 (Skip Schulz/For the Gazette) Ontonagon Village Council member Sarah Hopper (second from the left) questioned the marijuana ordinance at the October meeting. Village President Tony Smydra (far left) stated that the ordinance is just “laying the foundation” in the village opted in on a retail marijuana business.

ONTONAGON — The Village Council went one step closer to making changes in an expanded downtown, by unanimously passing a new 30-year tax incremental financing (TIF) capture plan. The plan is a part of a detailed Downtown Development Authority (DDA) concept.

“John Iacoangeli from Becket and Raeder Consultants and Michael Burzynski are very much appreciated,” said Erickson.

Erickson then gave thanks to former Governor Rick Snyder and current Governor Gretchen Whitmer for the Rising Tide Program.

The council also took the first step in a process to abandon Balsam Street in the Beach Parkway subdivision.

“As a past practice, the village has received the approval of all property owners adjacent to the right of way,” Erickson said.

One of those adjacent property owners is Bruce Ruutila, who spoke at Monday’s meeting. The individual asking for the abandonment, Don Kulis, stated that he plans on building a home on lots where the abandonment of Balsam Street is necessary.

Speaking on support of the abandonment was Norm Pestka.

“I think we should abandon it. Make it fit so these people can come to Ontonagon.” Pestka said.

A construction company owner, Pestka continued to comment on the situation.

“If it is an issue of getting a road back to Mr. Ruutila’s property, I will furnish my bulldozer and my sand and gravel to make sure he (Ruutila) has access to his lots,” said Pestka.

As the council moved to continue the process, without making a decision on the abandonment, the village did acquire other property. The council voted to pay $1.00 to the Michigan Department of Transportation to transfer the old M-64 Right-of-Way adjacent to the Ontonagon Marina.

While the council voted 5-to-1 on Oct. 14 to opt out of allowing a marijuana retail store to open in the village, the issue still drew discussion between council member Sarah Hopper and the recently council-appointed president Tony Smydra. This dealt with the wording of a marijuana ordinance. An ordinance that would be used in the future if the village changed their mind to allow a retail marijuana business to open.

The concern Hopper, who was the lone dissenting vote in opting out at the previous meeting, has was how a business would have to go through the process of getting a special use permit.

“Does a bar have to get a special use permit?” Hopper asked.

Smydra stated that this ordinance is simply laying the ground work.

“We’re laying the foundation should we want to go in that direction,” he said.

A part of that foundation, was questioned by Bruce Johanson of a local media outlet. His question pertained to who will have the final say if the council decided to opt in at a later date.

“Would the Planning Commission make that decision or the Village Council?” Johanson asked.

Smydra stated that the final decision would still be in the hands of the council.

As of mid-October, the following Ontonagon Townships have voted to opt out of allowing a marijuana retail business; Bergland, Carp Lake, Ontonagon, Rockland, and Stannard. Townships and the village of Ontonagon had until Nov. 1 to opt out.

Village Manager Joe Erickson reported that the M-64 water leak valve was installed and the leak under the highway is shut off. Engineering will be done to prepare the specifications for repair or replace the water main under the highway. The Department of Public Works crew flushed and winterized the fire hydrants last week.

“Two water leaks were repaired,” he said. “The crew is also getting things prepped for winter.”

On the subject of winter, the council approved a $500 request to help in advertising the 18th Annual Hometown Christmas celebration. This popular three-day celebration will run from Dec. 6 to 8, and continue with the village’s tradition of having a family-oriented parade.

With winter on the horizon, the council approved allowing the North Country Snowmobile Club to hold both snowmobile and off-road vehicle races on village-owned property adjacent to the club’s garage and clubhouse. The agreement between the village and the volunteer-led club is for five years. The village will also provide portable bathrooms and waste removal from them for both the winter and a possible summer event.

However Erickson could not guarantee that the Jan. 11 MASTERS Racing Circuit-sanctioned snowmobile race would have snow.

“I prefer it not to snow this winter,” Erickson said. 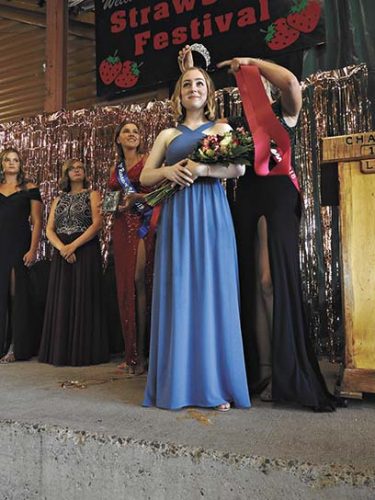