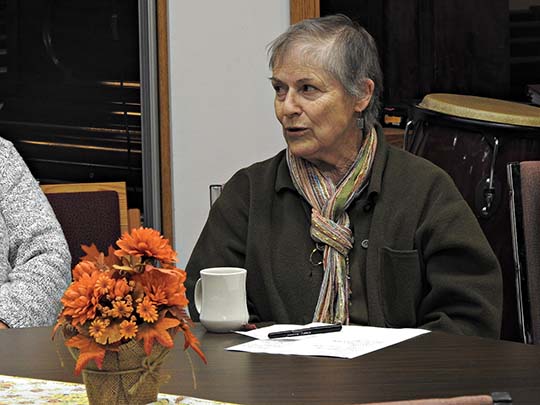 (Garrett Neese/Daily Mining Gazette) Susan Burack, past president of Temple Jacob, talks about the synagogue’s history during a community forum about recent Nazi graffiti at the synagogue.

HANCOCK — The anti-Semitic graffiti sprayed on Temple Jacob in September was one of two incidents directed by a white supremacist in New Jersey, according to a federal complaint.

Richard Tobin, 18, allegedly recruited fellow white supremacists on a neo-Nazi social network to vandalize Temple Jacob, as well as a synagogue in Wisconsin, according to federal court documents. Media reports have identified the other synagogue is Beth Israel Sinai Congregation in Racine, Wisconsin, which was vandalized the day after Temple Jacob.

“I’ve had the opportunity to read the affidavits of the arrest, and the details of the affidavit are certainly disturbing,” said Temple Jacob president David Holden. “I am, however, pleased with the work local law enforcement and the FBI have done. I look forward to them finishing the case and arresting the co-conspirators.”

The name of the social network was not included in the documents. Other media outlets have identified it as The Base, a far-right neo-Nazi site devoted to a white ethnostate and conducting survivalist training.

Between Sept. 15 and Sept. 17, the complaint states, Tobin directed members of the group to vandalize the synagogues and other minority-owned properties between Sept. 20 and 25.

According to the affidavit, Tobin told an FBI agent he had called for a nationwide campaign named “Operation Kristallnacht” after violence directed at Jewish-owned homes and buildings in Nazi Germany.

Different members of what Tobin termed the group’s “Great Lakes Cell” committed vandalism at each synagogue, according to the complaint. The suspects were not named in the complaint.

After executing search warrants at Tobin’s house, federal agents found a variety of communications linking him to the crimes, according to the complaint.

On Sept. 17, Tobin did a Google search for “Kristallnacht,” and visited an encrypted messaging program bearing the symbol used by The Base, the complaint states. The Monday after the graffiti, Tobin used an encrypted messaging program to communicate with the person suspected of spray-painting the Wisconsin synagogue, then immediately visited a website to read an article about it. He also conducted a Google search for Racine, along with the group’s name and the terms “Nazi” and “anti-Semitic.”

The same day, Tobin repeated the same activity with the person suspected of spray-painting Temple Jacob, the complaint states. Tobin also viewed another article about Temple Jacob on Oct. 31.

Files and browser history also show an obsession with neo-Nazis, terrorism and acts of violence, the complaint states.

Tobin also confessed he wanted to be a suicide bomber or commit suicide by cop, according to the complaint. In one incident, he had considered a machete attack at a New Jersey mall because he was “enraged” by the number of black people there.

Tobin was held in custody pending a mental health evaluation. His detention hearing is scheduled for Dec. 2.