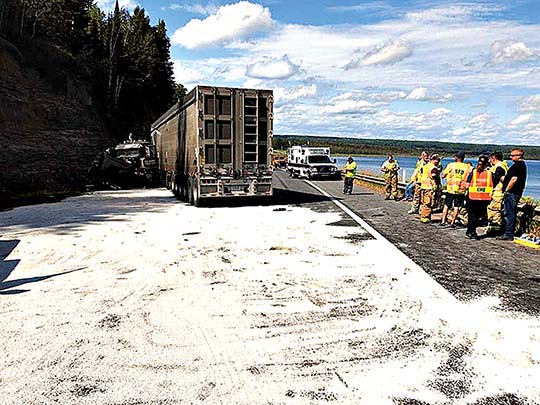 Garrett Neese/Daily Mining Gazette Emergency crews respond to a crash on U.S. 41 near L’Anse in August, which closed a section of the highway, the only all-season road connecting the villages. Baraga County is developing plans for an alternate 17-mile route from U.S. 41 to M-38.

L’ANSE — U.S. 41 is the only all-season road connecting Baraga and L’Anse.

When that connection is severed, either through lake water reaching the roadway or closures from crashes, drivers are detoured more than 100 miles out of their way.

Baraga County is seeking a better alternative. The county is proposing an all-season road that would bypass U.S. 41.

The proposed 17-mile road would connect U.S. 41 to M-38. It would use the existing right of way for the Baraga Plains Road, a gravel road open to cars during the summer.

Movement began on the issue after Baraga County Memorial Hospital approached the county about an alternate route, said county Road Engineer Douglass Mills. A U.S. 41 closure puts the hospital on the other side of the breach from Bay Ambulance, which is in Baraga.

“If we have one of the big storms that have happened previously, it could be a problem,” Mills said. “Lot of short-term closures with accidents, visibility. It’s a long detour route.”

The official detour takes drivers to Bruce Crossing, a 100-mile trip that adds an extra hour and a half of driving.

That section of U.S. 41 has been closed several times for accidents in recent years, including a natural gas fire in 2016 and a fatal accident near L’Anse in August.

Cost estimates for the road run from $25.5 million to $42.5 million. The county will go to the Keweenaw Bay Indian Community Tribal Council later this month. Its backing of the project could open up federal funding, Mills said.

The Road Commission has presented the idea to several government boards, which have been supportive of the idea, Mills said.

“We’ve had a very positive reception at every meeting,” he said. “People ask good questions and are thinking about it, which is what were looking for.”

As the county investigates another route, the state is also looking at improvements to U.S. 41 that would mitigate the interference from high lake levels. Michigan Department of Transportation (MDOT) has a concept for raising the grade about three feet over more than a mile of highway. It would run from the bottom of the Red Rocks near Menge Creek Road to Baraga State Park. The roadway would also be armored by large stone, said Rob Tervo, manager of the MDOT Transportation Service Center in Ishpeming.

Rough estimates put the cost at $9 to $10 million, Tervo said.

“Certainly with the lake level at the elevation that it is, it’s something we’re keeping a close eye on,” he said. “We want to be able to react if the levels continue to come up.” 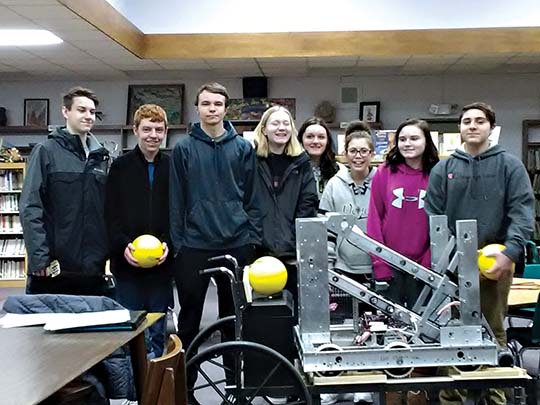 No disassembly required of team: Ontonagon excited about robotics

HOUGHTON — “Lansing is rife with lobbyists,” states the Michigan Campaign Finance Network. “If you can ...