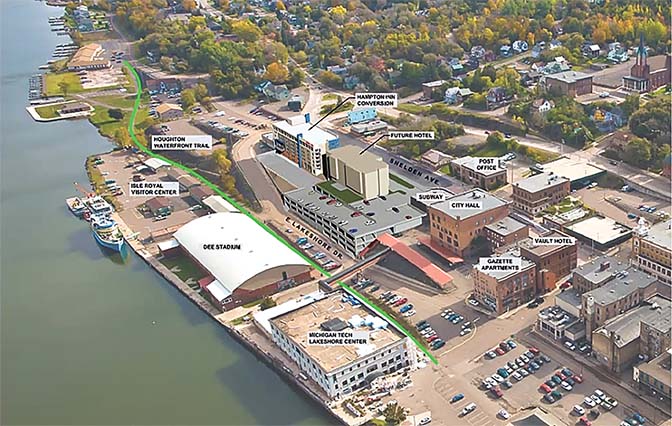 HOUGHTON — The Houghton Planning Commission heard a preliminary concept for a hotel next to the Franklin Square Inn at its meeting Tuesday.

The extended-stay hotel would be five stories, and between 70 to 80 rooms, Julien said.

Julien said he would look to secure redevelopment funds through the Houghton County Brownfield Authority for the site. The brownfield package would leverage the private investments in the hotel to help build a new city-owned parking structure that would sit over the existing structures and switchback parking behind the hotel. The new structure would provide nearly 300 spaces, which could also be used for parking for people looking to shop or go to events at Dee Stadium, Julien said.

“At some point in the near future, we’re going to be probably presenting an actual ask of the (Downtown Development Authority) and the City Council to support the brownfield plan that we’re going to be putting into place,” Julien said. “As you can see, it’d be taking some dilapidated buildings in downtown and really transforming that entire block of downtown.”

The brownfield program provides a way to better understand what needs a property might have during redevelopment and to address them quickly, said Jeff Hawkins, a consultant for the brownfield plan from Envirologic. Some of the property was formerly used as a gas station.

“The City of Houghton is a core community, and a core community really expands the ability to leverage private investment dollars and taxable income that will be coming off of the hotel to pay for infrastructure improvements and site preparation on these properties,” he said. “…I think the brownfield is one of the strongest redevelopment and economic development tools that are in everybody’s tool belt in this area, and hopefully I think it can be a real asset from this project.”

Commissioner Michele Jarvie-Eggart said making profile views of the planned hotel available to the public could help alleviate concerns about the viewshed. The proposed hotel would be about the same height as the Franklin Square Inn, Julien said. Also, he said, there is already an existing building on the site, limiting the change to the viewshed.

“Granted, this one will be a little bit taller, but there’s not a whole lot of loss there,” he said.

The steepness of the hill could limit any sightline obstacles for residential areas, residents said. Commissioner Mike Needham said he had been walking along the ramp that shoots off Montezuma Avenue; even that near downtown, the Franklin Square Inn was at about eye level, he said.

Julien said he would create renderings to show the view from other locations.

Other commissioners asked about the appearance of the new work: Jarvie-Eggart wanted to make sure the design was in keeping with the historical nature of the downtown; Commissioner Bill Leder raised the same issue with the parking structure.

Julien was receptive to that; he said. He is working with an undisclosed franchise; in his application, he noted he would like to alter the exterior from the franchise’s usual model.

Also, he added, unlike much of the downtown, the buildings that would be torn down are not considered historically significant. A city plan for a historical district in the 1980s left those buildings out.

“These buildings are actually specifically excluded from that study to say that they are not historic and they do not add historic value to this district,” he said.