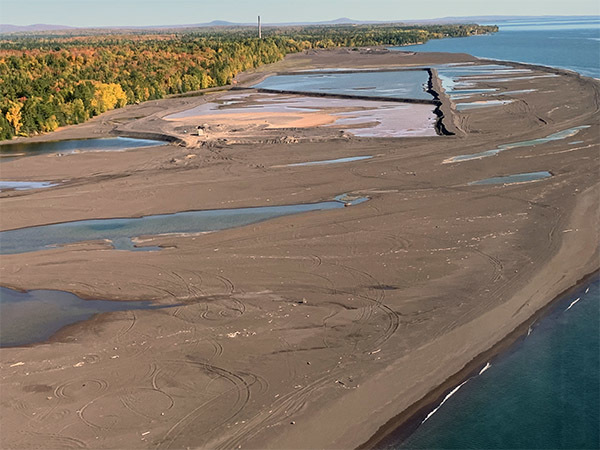 A smokestack near the top of this photograph is the former location of the stamp mill at the community of Gay. The dark beach sands dominating the image are stamp sands generated by copper production at the mill that have since migrated south, threatening Buffalo Reef. (Rob Aho /Michigan DNR)

An aerial view shows the Traverse River and stamp sand and natural beaches in the area.

A team of engineers and scientists from the U.S. Army Corps of Engineers is working with the Buffalo Reef Task Force to develop cost estimates and other details for three finalist action plans aimed at protecting the reef’s important Lake Superior fish habitat.

After extensive consultation with the public and other stakeholders, the Buffalo Reef Task Force recently narrowed its list of 13 action plans under consideration to three.

Over the past roughly 100 years, historic copper mine tailings from the Wolverine and Mohawk mines – called stamp sands – were deposited at a milling site along Lake Superior, located in the community of Gay in Keweenaw County.

Since that time, the stamp sands have been moved by winds and waves south down the shoreline roughly 5 miles, inundating natural sand beach areas and threatening to cover spawning habitat and recruitment areas important to Lake Superior whitefish and lake trout in and around Buffalo Reef.

The reef is situated off the Keweenaw Peninsula’s Grand Traverse Harbor.

The three finalist action plans include:

• Building a landfill in an upland area near the community of Gay for the stamp sands removed from the lake and beach.

• Placement of stamp sands removed from the lake and beach in the tailing basins at the former White Pine Mine in Ontonagon County.

The team of engineers and scientists is working to develop preliminary implementation cost estimates and to identify potential benefits and risks for each alternative.

The task force will present the costs and benefits of the three designs to the public with the end goal of selecting the best alternative. After that, if funding is available, the selected alternative, or alternatives, will be fully designed and ready to be implemented.

Meanwhile, the Michigan DNR is funding efforts to pull back a 25-foot-tall cliff adjacent to the shoreline at the original stamp sands pile at Gay.

“On average, about 26 feet of material from the cliff erodes into Lake Superior annually, even more at today’s record high lake levels,” said Stephanie Swart, a task force member and Lake Superior coordinator for the Michigan Department of Environment, Great Lakes, and Energy. “Pulling the cliff back and depositing the material farther away from the lake will dramatically reduce new erosion into Lake Superior.”

While this work is taking place – scheduled to begin in November – the task force will continue its efforts to develop and implements a long-term management plan for saving Buffalo Reef.

Earlier this year, Peterson Companies, Inc. completed its dredging in and near the Grand Traverse Harbor. Anticipated 2019 dredging of the “trough” north of Buffalo Reef was postponed until next year, after delays.

“The trough dredging is designed to prevent stamp sands driven by waves and lake currents from passing over the trough and onto the reef,” said Tony Friona, liaison to the Great Lakes for the U.S. Army Corps of Engineers, Engineer Research and Development Center in Buffalo, New York. “While regrettable, the delay is unavoidable.”

In February, the task force issued an alternatives analysis which briefly described 13 potential strategies for managing the stamp sands.

In May, the task force released a responsiveness summary to public comments on the analysis of the alternatives.

On June 20, the task force met to review the 13 alternatives and hone the finalists down to the three options, which are now being fleshed out with specific costs and feasibility.

A public meeting on the alternatives was held in Lake Linden in July.

For more information on the ongoing effort to save Buffalo Reef, visit Michigan.gov/BuffaloReef.

To sign up for Buffalo Reef email updates, visit Michigan.gov/DNR and see the bottom left-hand corner of the webpage.

Sands: A smokestack near the top of this photograph is the former location of the stamp mill at the community of Gay. The dark beach sands dominating the image are stamp sands generated by copper production at the mill that have since migrated south, threatening Buffalo Reef. (Rob Aho photo)/

LANSING – The Michigan Department of Health and Human Services (MDHHS), in partnership with the Mental Health ...