For Michigan farmers, the end of the 2019 cropping season can't come soon enough 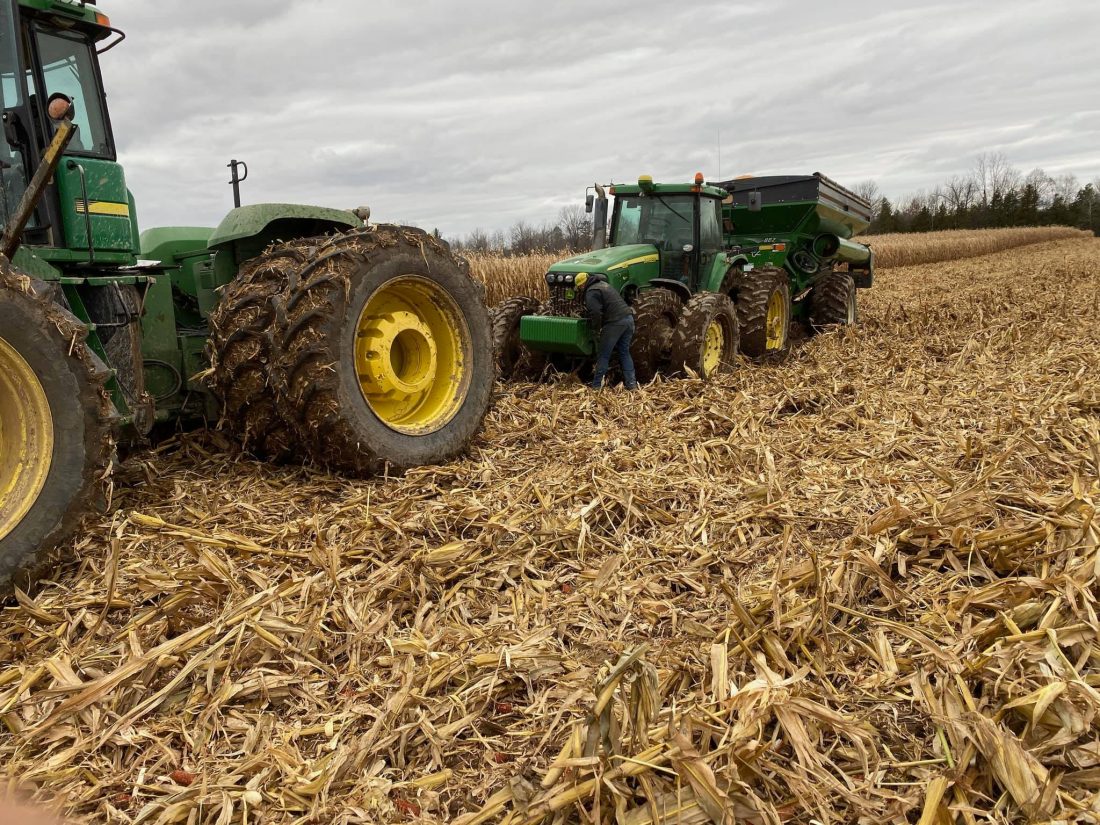 An all too familiar scene across Michigan this fall for farmers, Kartes Farms LLC of West Branch in Ogemaw County, are dealing with muddy fields in the race to complete the 2019 corn harvest. (Photo: Mary Kartes)

The weather challenges that delayed planting this past spring continue to haunt producers this fall as heavy rains throughout September and October, and now early snowfall in November, interfere with harvest activity, according to Michigan Farm Bureau Field Crops Specialist Theresa Sisung.

“Most Michigan farmers were anticipating a late-harvest due to the late planting of many major field crops, but the end of the 2019 crop-year is proving to be just as difficult as the start of planting,” Sisung said. “Yields had already been negatively impacted due to late-planting – but the harvest-delays this fall are just adding insult to injury at this point.”

Sisung added that the window of time is quickly closing before producers may be forced by Mother Nature to abandon crops, especially potatoes and sugarbeets, which are vulnerable to predicted record-cold temperatures this week – the forecast calls for overnight lows of 9 degrees.

“Many farmers are also concerned they won’t be able to harvest corn for grain due to the late-maturing of the crop, with estimated moisture content of grain that has been harvested running as high as 26% instead of the normal 18% to 20%,” Sisung explained, adding that corn harvest is only 33% complete compared to the five-year average of 66%. “Unfortunately, the current weather pattern shows no significant dry-down opportunity.”

Soybean harvest at 74% complete is also lagging behind the five-year average of 86%, with higher-than-normal moisture levels averaging 17% instead of the normal 14% to 15% levels. Sugarbeet harvest, estimated at 80% complete, is running slightly behind the 84% five-year average.

The USDA’s November Crop Production Report, based on conditions as of Nov. 1, 2019, highlights the weather impact to Michigan and national-level yields and total production:

• Michigan corn yield is down 2 bushels from last year to 151 bushels per acre. Total production is expected to be 263 million bushels, down 11% from last year. Michigan corn for grain harvest progress was the third lowest in the nation; only North Dakota and Wisconsin were further behind.

• Sugarbeet growers anticipate a yield of 27.9 tons per acre, down 1.2 tons from last year. Production is forecast at 4.05 million tons. Sugarbeet harvest lags every other major sugarbeet producing state.

LANSING - If you or your family will be living near or visiting Michigan waters this summer, it is important to be ...

LANSING — To ensure front-line hospital workers caring for and treating COVID-19 patients are receiving the ...

GRAND RAPIDS, Mich. — Andrew Birge and Matthew Schneider, the U.S. Attorneys for the Western and Eastern ...