Calumet in regional; faces Manistique on Tuesday in Esky 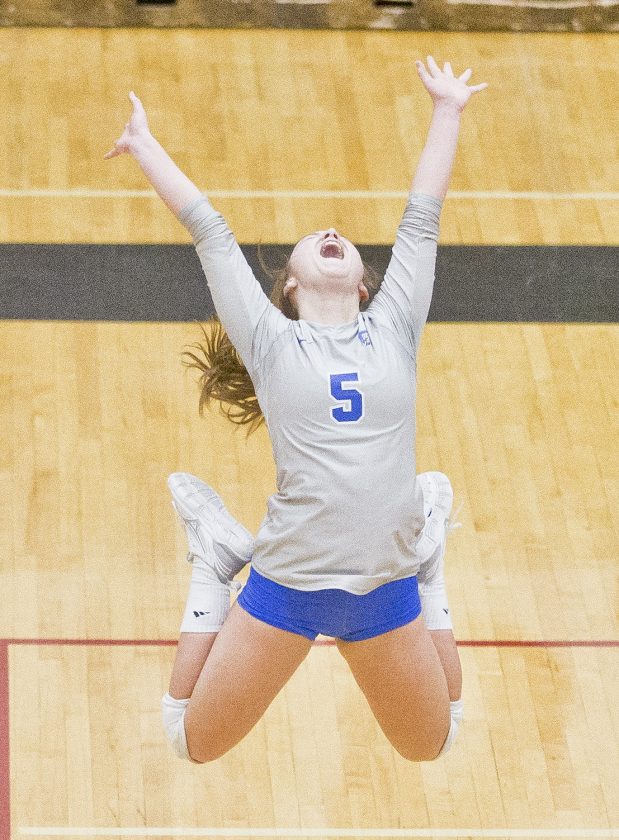 The Copper Kings won their eighth straight district championship with a 3-0 (25-13, 25-15, 25-12) victory over the Red Devils Thursday night. But peaking at the right time and getting to this Division 3 District 65 final during a week full of home tournament games is what mattered for the Red Devils.

“It was so fun,” Ironwood coach Lisa Fechter said. “It was great to be here. To win those two games earlier in the week was a lot of fun. We ended our season on a high note. This didn’t go the way we wanted it. We lost to a good team. You can take that.”

Calumet will play Manistique in Tuesday’s regional semifinal in Escanaba, a rematch of last year’s semi won by the Emeralds.

While Ironwood has just one senior, Calumet has nothing but juniors and seniors on a 16-player roster. Junior Elli Djerf led Calumet with 13 kills, senior Gloria Hendrickson had six and senior Madison Peterlin had five. Junior Cami Johnson had a team-best six aces.

Ironwood may be younger, but Fechter saw them fight like they have all week. In the middle of the second game, Maddie Vaughn’s serving helped Ironwood narrow the gap to 11-9. It was just impossible to sustain the momentum against such a strong team.

“We could do it for bits and pieces here and there, which was great to see for my young team,” Fechter said.

Calumet’s depth is more than just a big roster, everyone they put in the game could play.

“One would go out and a new one would come back in and she was just as tough, hitting just as hard,” Fechter said. “They could set anybody across the front line there and they were hammering it down. We’re just not at that level.”

“It doesn’t matter who’s across the net from us,” Laho said. “We have to come in and play our best game and just come in and be aggressive and they did a great job tonight.”

Jordan Tanula led Ironwood with six kills. Ironwood’s only senior, Caitlyn Mylly, had a team-best six digs and she had two kills. Madison Huotari had five digs. Aundrea Stengard and Madison Sterbenz each tallied a kill.

Ironwood finished the season at 9-16.