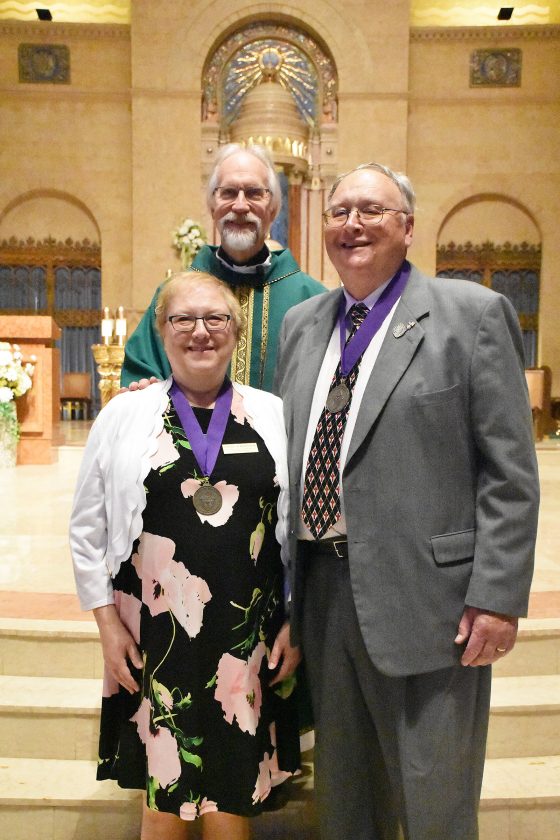 Two couples from Marquette and a woman from Ontonagon have been selected to receive the 2019 Legacy of Faith Catholic Service Award. The recipients are Bob and Sandy Jurkovich of St. Peter Cathedral, Sally Luft and her deceased husband, Cliff, of St. Michael Parish and Doreen Parker of Holy Family Parish.

Shortly after moving to Marquette years ago, Bob and Sandy Jurkovich joined the Young Families Club at St. Peter Cathedral and became an inspiration to many, including Laurie Schmit, who nominated them for this award. She wrote in her nomination form, “We were welcomed by Bob and Sandy into the Young Families group, which led to our involvement in other parish ministries…They go out of their way to ‘grow’ the church by welcoming new people to parish events and host the annual Christmas gathering at their house.”

Schmit also stated, “Bob currently chairs the Diocesan Hospitality Committee, organized and oversaw the church picnic for over 20 years, is actively involved with the Knights of Columbus and is a member of the parish council.”

In his letter of support for the nomination, Andrew Wasilewski noted that Bob had served as Grand Knight of the Knights’ Council 689 and brought up the idea that the council should help the community by cleaning up trash along US 41. “We are now responsible for a two-mile stretch that includes the Green Garden Hill,” Wasilewski explained. He also wrote that Bob serves as an usher at church and the coordinator for the Christian Families organization. 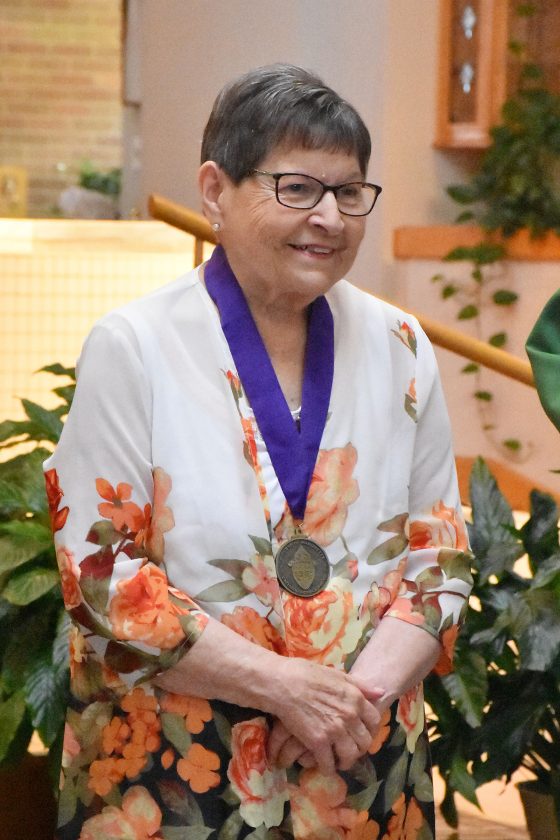 Schmit enumerated a few of Sandy’s ministries, writing, “Sandy taught religious education classes, provided games and crafts for the children at the picnic, works with Diocesan Hospitality Committee, is Secretary for the Women Caring and Sharing (Altar Society), co-chairs the Funeral Committee, served as co-chair to update and modernize the kitchen to meet Marquette County health standards, brought back and organized the 2016 live reenactment of the Nativity by children in the parish and is an active member of the Bishop Baraga Association.”

According to Deborah Vezzetti’s letter of endorsement, Sandy was an outstanding elementary school teacher who enjoyed educating youngsters and assisting disadvantaged students. “As a colleague, I have been able to witness Sandy’s creativity in delivering lessons and to know of her success in leading challenged children to see themselves in a positive light,” Vezzetti wrote.

In addition, for over 20 years, Sandy and Bob have prayed before the Blessed Sacrament during their separate hour each week in the Perpetual Eucharistic adoration chapel at the cathedral. The Jurkoviches are the parents of three adult children: Anne Lund, Jay Jurkovich and Father Robb Jurkovich, who all attest to the big impact their parents’ faith has had on their lives.

In their letter of support for the nomination of Sally and Cliff Luft, Deacon Dennis and Mary Maki said it best. “You can’t say one name without the other,” the Makis wrote. The retired pastor of St. Michael Parish, Msgr. Jed Patrick, also wrote, “Cliff and Sally were truly a team in their ministry involvements in the diocese and the parish. Even in their many individual parish involvements, they were 100% supportive of each other.” 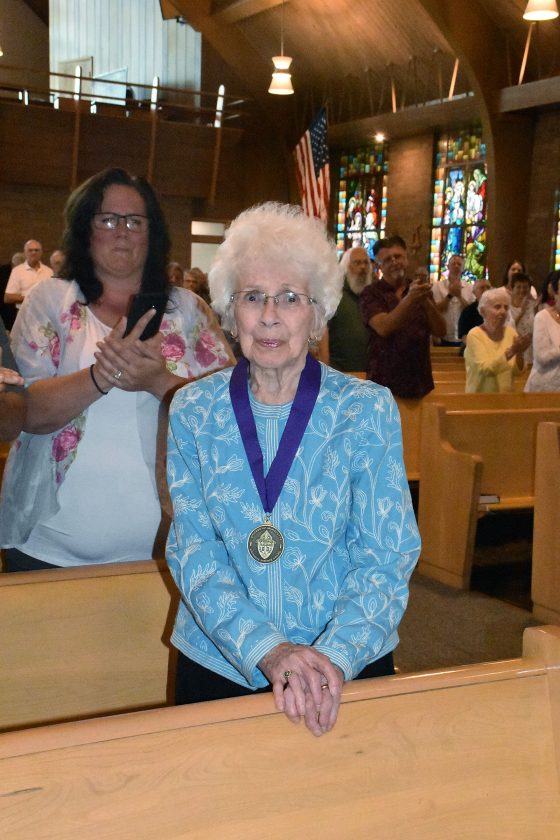 For example, they were both graduates of the diocesan Lay Ministries Leadership School and earned master’s degrees from Loyola University of New Orleans through a diocesan extension program. They were co-directors of Catholic Campus Ministry at Northern Michigan University and served on the board of directors for the Marquette County Habitat for Humanity (Cliff as president) and provided meals for the Room at the Inn homeless shelter. They served on St. Michael’s Christian Service Committee (Sally as chairperson) and were team members for the Rite of Christian Initiation for Adults process, just to name a few of their parish activities. They both made their Cursillo.

In addition, after retiring as a public-school superintendent, Cliff served as the superintendent of the 10 Catholic schools in the diocese, president of St. Michael’s parish pastoral council, secretary of the parish Men’s Club, and president of the North Menominee County Kiwanis Club. NMU honored him with an Alumni Achievement Award in 2010. In his final days, Cliff faced a fast-moving cancer with an extremely strong faith. He died on December 26, 2017.

Raised in the Methodist church, Sally converted to Catholicism when she was a junior at NMU. In the past, she has served as the associate director of the diocesan office of worship and lay ministries leadership school, pastoral associate at St. Michael’s and Our Lady of Perpetual Help Mission in Palmer, coordinator of religious education programs, and St. Vincent de Paul store volunteer. She has presided at parish communion services and was a teacher and training consultant for the Head Start preschool program.

Music has been the mainstay of Doreen Parker’s service to her church and community for over 73 years. She began playing organ at Holy Family Parish as a young teenager. Until her retirement earlier this year, she continued to serve as accompanist for weekend, weekday and Holy Day Masses, funerals, weddings and nursing home Masses. In addition, she spent hours planning the music for services, practicing by herself, and rehearsing with the choir. She did all of this for many years without pay.

Doreen also participated in the area’s ecumenical celebrations by playing organ or other musical instruments. She willingly played at funerals and weddings in churches of other denominations when asked. In addition, she gave piano lessons in her home to whoever wanted them.

According to Bruce Johanson, the retired Ontonagon Area Schools’ Bands and Choral Director, Doreen gave freely of her time to travel with him to school music festivals and solo-ensemble events. She would accompany the young musicians in their competitions and encourage them in their musical efforts. In his letter of support for Doreen’s nomination, Johanson said, “She has used her God-given talent for the benefit of all who have known her.”

While raising six children with her late husband, Donald, and working as a bank cashier, she still made time to play for events like the Miss Ontonagon County pageant and worked on local summer musical productions. Although music was at the core of her service to the church and her community, Doreen also served as treasurer for many years on the board of directors of the Ontonagon County Historical Society. She and her husband helped provide information for a book on the history of the region, too. Doreen is the proud mother of Chris Gotham, Scott, Robert and Lynn Parker, Karen Dishaw and Anne Lundberg.

Catholic Service Award honorees are presented with a medallion and recognized at their local parish, as well as by the diocese at the Bishop’s Ambassadors annual dinner event. Their parishes receive a $250 grant for faith formation. To view short videos of the honorees online, visit www.youtube.com/theupcatholic.

The Catholic Service Award is a program of Legacy of Faith, which is an endowment fund of the Upper Peninsula Catholic Foundation. The award was created in 2006 in the spirit and intent of the endowment to preserve and foster the Catholic faith in the U.P. Nominations for the annual award are due by May 1 of each year. For more information, contact Terri Gadzinski at 906-227-9108 or visit www.LegacyofFaith.net.

LANSING – The Michigan Department of Health and Human Services (MDHHS), in partnership with the Mental Health ...