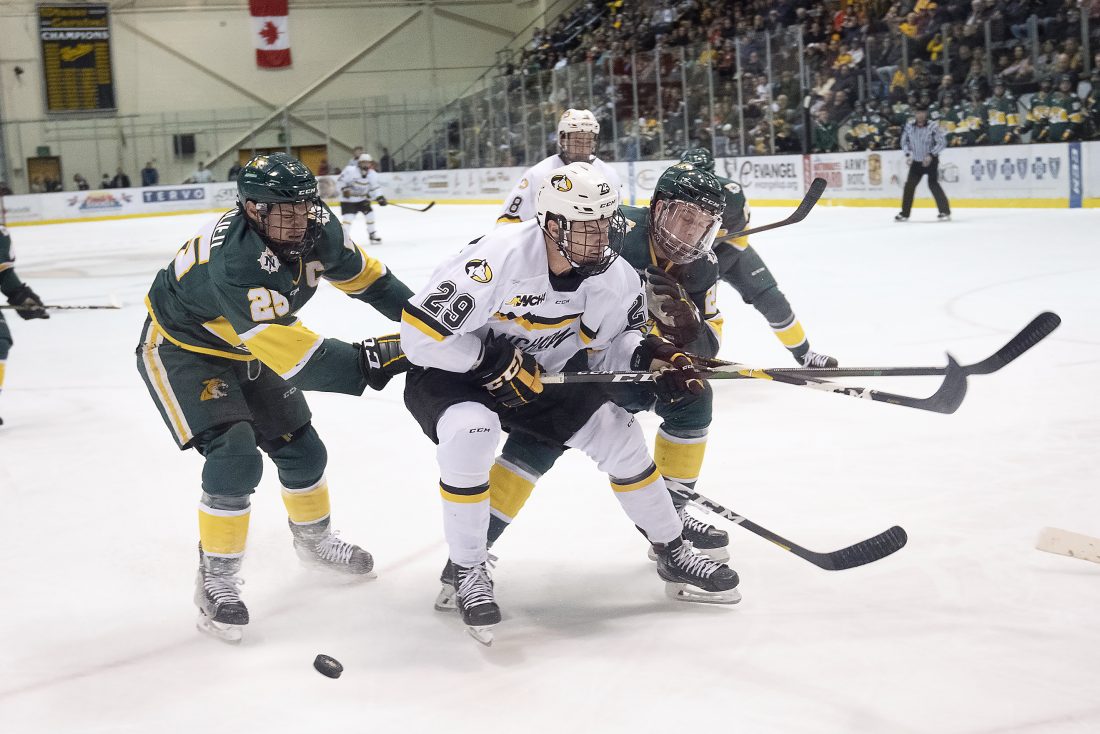 HOUGHTON — Michigan Tech’s offense showed up in the third period with a two-goal comeback to beat rival Northern Michigan 3-2 in WCHA action Friday.

The win is Michigan Tech’s third straight, while Northern has lost two straight.

The Huskies (6-6, 4-5 WCHA) have scored nine goals in the last three games, the most production in a three-game span in nearly two months.

Friday’s win was Tech’s first at home this season. The Huskies are 36-31-8 at the John MacInnes Student Ice Arena all-time against the Wildcats. But NMU still holds a 75-65-14 all-time series lead.

“Very proud of our guys. We played extremely hard,” Michigan Tech head coach Joe Shawhan said. “Northern’s a tremendous hockey team. Well coached. They do everything well. I’m extremely proud of our guys for the way they battled, persevered and overcame in a lot of ways. Did a great job.”

Michigan Tech goaltender Matt Jurusik made a game-saving save within the final 10 seconds when Wildcats center Ty Readman passed it up to Andre Ghantous, who had an open lane to Jurusik. Ghantous skated in, drifting to the Jurusik’s right and deked to his forehand, and Jurusik moved across and made a glove save. Tech cleared the zone and the clock expired.

“It’s disappointing because I thought for two periods we played really well,” Northern Michigan head coach Grant. “We limited their chances. We had a lot of good opportunities tonight. Their goaltender was outstanding tonight. He was outstanding right until the end of the game. But we can’t take as many penalties as we took and continue to play with fire.”

The Huskies were 1 of 7 on the power play. Northern had three third-period penalties.

“I thought we were a little erratic in penalties,” Potulny said. “Penalties affected the game. We lost the special teams battle tonight. To be honest, that was the difference in the game.”

The lone successful Huskies power play came halfway through the third when Brian Halonen took a quick one-timer in the slot, between the face-off dots, assisted by Eric Gotz and Seamus Donohue. It was Halonen’s fifth of the season.

The Huskies had tied the game a minute and 10 seconds before, when Colin Swoyer’s wrist shot beat NMU goaltender Nolan Kent stick-side. Swoyer took a pass from Parker Saretsky that went between the skates of an NMU defender. Swoyer took the pass and drifted between the top of the circles where he let the shot go.

“It was a 4-on-4, you don’t see those too often in practice,” Saretsky said. “I saw a little opening and passed it through to Colin. He made no mistake putting that one in. That was a big goal for us.”

It was an even game throughout, with Northern Michigan having a slight edge in puck possession and offensive pressure in the first two periods. Tech found chances in bursts until the third period when forechecking led to the scoring chances.

Northern Michigan broke the scoreless tie early in the second when WCHA leading scorer Griffin Loughran hacked a rebound past Jurusik 52 seconds into the second period.

Loughran’s 10th goal of the season was assisted by Philip Beaulieu and Adam Roeder.

“Shot from the point, rebound, just tried getting it on net as quick as possible,” Loughran said. “Got a lucky bounce and it went in.”

But Michigan Tech tied it 12 minutes after when Saretsky scored his third goal of the season on a rebound. Alec Broetzman’s shot from the point was knocked down by Nolan Kent to his left and Saretsky flipped it into the net.

“Alec shot it from the blue line and happened to get a stick on it, the puck was just lying there and banged it in,” Saretsky said.

Joseph Nardi gave the Wildcats the lead a minute after Saretsky’s goal when he took a pass from Caleb Schroer and cut in front of Jurusik. Nardi waited for Jurusik to make a move, and he did. Jurusik went down on his stomach with his glove out and Nardi wristed the puck into the net for the lead. Beaulieu had the secondary assist.

Shawhan said his team just dug deep in the third period to gut out the win.

“To be honest I think what happened was the circumstances of the game,” Shawhan said. “I think it just kind of ignited our team to play. If Northern Michigan scores on their chances that they were given, it’s probably a different game. Our guys rose to that and actually fed off of that. When the crowd got into it, our crowd’s absolutely outstanding here. You can’t do anything but love the people in Houghton, Michigan. So they got into it and I’m glad they were able to go home with a victory finally.”

Northern is 43-24-6 at home against the Huskies. Saturday’s game at the Berry Events Center begins at 6:07 p.m.

Michigan Tech is going for its first regular season weekend sweep of the Wildcats since Oct. 28-29, 2016.

Asked what it’ll take to win Saturday for the sweep, Shawhan laughed and looked across the room. 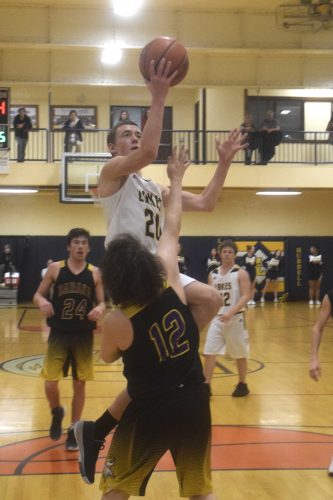 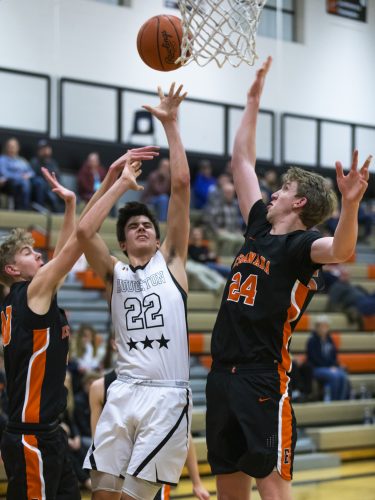