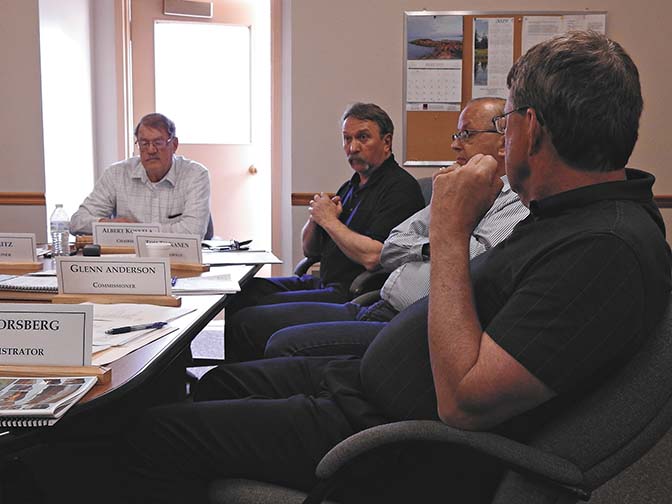 HOUGHTON — Turning Camp Kitwen into a county jail would pose a myriad of financial and logistical problems, Houghton County officials said at Tuesday’s board meeting.

About 12 county officials recently toured the former minimum-security prison camp, located near Painesdale. It has been unused since it closed in 2009.

The building appears to be structurally sound, although the roof needs to be replaced, said Commissioner Glenn Anderson. Corrections officers would have a difficult time with observation under the current format, which has two wings of 60 rooms per wing, with 30 rooms on each side.

Substantial remodeling would be needed to make it a secure facility while adding observational capabilities, said Sheriff Brian McLean.

“I don’t have the expertise to say construction-wise whether it could be done,” he said. “We know what we would like it to look like, and it’s not what it looks like now. It would have to be extensively redone inside.”

Another costly issue would be adding plumbing, including adding toilets to the rooms, said Board Chair Albert Koskela.

Of the four other closed prison camps in the Upper Peninsula, local officials had passed on all of them because of the designs and cost of remodeling, McLean said.

Camp Manistique, in Manistique, came the closest. It boasted a number of advantages not found at Camp Kitwen. It was already in the county seat, where the sheriff’s department must be located under state law. It was in a dormitory style instead of individual cells. And it was on city water and sewer lines, instead of Kitwen’s lagoon system.

“That was the most viable candidate for converting from a state work camp into the county jail, and yet they passed on that,” said Karin Cooper of U.P. Engineers & Architects, who is preparing cost estimates of several jail options for the county.

The state placed Kitwen and the surrounding 84 acres on sale in March.

County officials contested a recent suggestion from State Rep. Greg Markkanen that the county buy the camp for use as a multi-county jail and possible mental health facility.

Commissioner Tom Tikkanen said to the best of his knowledge, Markkanen had not contacted any board members or sheriff’s department personnel from Houghton or Keweenaw counties, or looked at conversion costs. He foresaw increased operating costs not just for the additional staff that would be required, but for transportation costs for taking inmates to appearances in court, which would be 9 miles away.

“I’m happy that we have a task force that’s going to be very well represented by Houghton County taxpayers and community leaders,” he said. “I think we’ll determine what’s best.”

Sheriff Brian McLean said the idea of a regional jail is a “logical leap of faith,” which has yet to attract any support from counties due to the extra costs and distances.

“Now all of your residents that you’re sending away for long-term sentences in the regional jail, how is the family going to visit when you’ve got to go that distance?” he said. “… if there are counties out there that want to come in and get in on our regional jail, please enlighten me about it, but I know of none that want to.”

Typically, about 90 percent of the inmates in the county jail have yet to be sentenced, meaning they will still be traveling to court, Administrator Eric Forsberg said. Video arraignments in district court from the jail have reduced trips to court by 30 percent, McLean said. But for any court hearing where the court might make a determination on the defendant, they have a constitutional right to face witnesses and accusers, McLean said.

“Any defense attorney worth their salt is going to demand their client is in the courtroom when all these proceedings are going to go on,” he said. “That’s why it’s impractical to send them away to regional jail, because you may be returning for court five or six times.”

At a recent county commissioners school Anderson attended at Michigan State University, speakers said it is unclear whether current legislation even permits a regional jail, he said.

Despite the earlier studies, McLean said he is still willing to consider Camp Kitwen.

“We’ll go into it with an open mind and come up with the best decision,” he said.